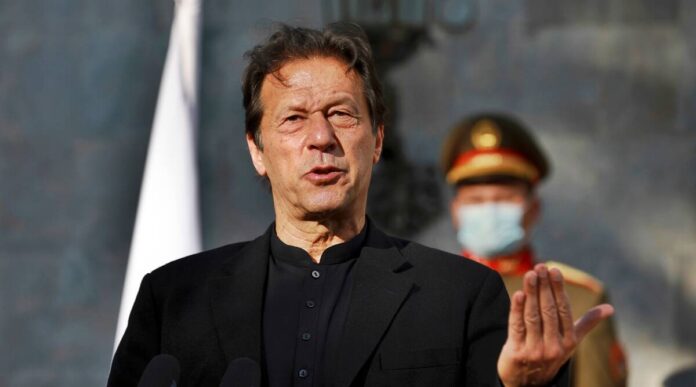 ISLAMABAD: Prime Minister Imran Khan and President Dr Arif Alvi on Thursday reaffirmed Pakistan’s support for the rights of the people of Palestine and their struggle for a homeland.

In a telephonic conversation with Palestine Authority (PA) President Mahmoud Abbas, Imran reassured him of Pakistan’s support in mobilising the international community against “flagrant violations” of human rights and international law.

“He reaffirmed Pakistani leadership’s complete support during this time of crisis,” the Prime Minister’s Office (PMO) said in a statement.

Abbas welcomed the gesture and appreciated Islamabad’s response and its statements condemning Israel’s attacks in Gaza and Al-Aqsa Mosque.

He also briefed the prime minister on the recent developments and exchanged views on the future course of action.

The statement further said the prime minister strongly condemned the attacks on innocent worshippers in Al-Aqsa mosque and lethal air strikes by Israel in Gaza.

The two leaders also agreed to continue to closely engage on the ongoing situation.

Separately, Alvi also assured Abbas of support and raising voice for his people.

In a letter addressed to the PA president, Alvi said that Israel’s violent acts were against humanitarian norms, human rights, and international law.

He also reaffirmed Pakistan’s abiding support for a just settlement of the Palestine issue in accordance with the relevant UN Security Council (UNSC) resolutions and for the establishment of an independent, viable, and contiguous Palestinian state, with pre-1967 borders with Al-Quds Al-Sharif as its capital.

At least 132 people have been killed in Gaza since Monday, including 32 children and 21 women, and 950 others wounded, Palestinian medical officials said.

Alvi, in his letter, conveyed the deep sadness and concern over the series of violent attacks against innocent worshippers at the Al-Aqsa Mosque compound during the holy month of Ramadan.

“Your Pakistani brothers and sisters, including myself share your pain and distress caused by Israel’s indiscriminate killing of innocent Palestinians, including children in Gaza,” he wrote.

“We express our profound sympathies and condolences for the victims of these attacks and pray for speedy recovery of the injured.”

He briefed Al-Malki on Pakistan’s efforts to sensitise the world on the “serious situation” and the violations of rights and international law.

Qureshi reassured Al-Malki of steadfast support to Palestine during these testing times.

Al-Malki updated on the dire situation on the ground, as well as the efforts being made to prevent its further worsening.