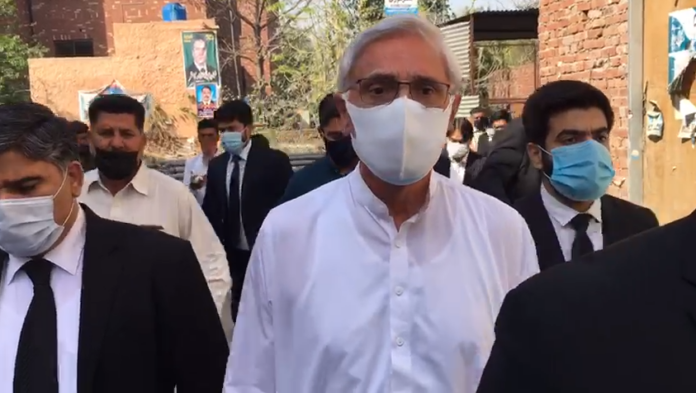 LAHORE: A day after Jahangir Tareen refuted speculation about him joining the Pakistan People’s Party (PPP), estranged Pakistan Tehreek-e-Insaf (PTI) leader on Wednesday regretted that his “loyalty [to PTI] is being tested”.

In March, Federal Investigation Agency (FIA) registered three cases against Tareen and his son Ali Tareen, among others, on charges of corporate fraud and money laundering. In a tweet, Tareen rejected the “fabricated” charge sheet, denying any wrongdoing.

Last week, a banking court in Lahore granted one-week pre-arrest bail to them. Today, the court extended the bail period.

Speaking to reporters in Lahore after appearing in the court, Tareen said: “I have given my blood and sweat [for the PTI]. Do you think I can leave the party [to join PPP]? Absolutely not.”

“I was and will continue to remain a part of the PTI,” he said.

Tareen also denied reports of a future meeting with PPP Co-chairperson Asif Ali Zardari — as tweeted by PPP leader Syeda Shehla Raza who claimed the meeting had been scheduled for next week. Raza deleted the tweet after it drew rejection from both parties.

During his talk, Tareen also condemned the legal action initiated against him and his family.

“Despite these things happening against me and my family for the past year [following the sugar inquiry report], I have remained silent. What more proof do you need of my loyalty,” he questioned.

“Not one, not two, but three FIRs [first information reports] were registered against me,” he said, adding that his “loyalty was being tested”.

Tareen wondered why he was being singled out among the owners of 80 sugar mills functional across the country.

He said that his and his son’s bank accounts had been frozen without any development in the case concerned. “Why was this done? Who is benefitting from this, […] who is behind this?”

In a show of support, PTI legislators from Punjab — including Raja Riaz, Noman Langrial, Salman Naeem, Ghulam Bibi Bharwana, and Khurram Leghari — accompanied Tareen to court to expressed solidarity with him.

Meanwhile, Riaz, who was also present during the presser, said the prime minister “would not have been successful” in securing the vote of confidence from parliament in March without Tareen.

“He [Tareen] played the biggest part in obtaining the vote of confidence [for the PM]. Perhaps he [Imran] would not have been successful had Tareen not played his part.”

He said that Tareen had played a part in forming PTI governments in Punjab and at the Centre. “Now people close to the prime minister are hatching conspiracies against him and exacting revenge.”

Riaz further said all the MPAs and MPs, that had gathered for today’s hearing, were united in denouncing the “injustice” against Tareen. “We think the prime minister should take action against this.”

The cases against Tareen were registered under sections 406 (criminal breach of trust), 420 (cheating of public shareholders), and 109 of the Pakistan Penal Code (PPC) — with sections 3 and 4 of the Anti-Money Laundering Act, 2010 — on March 22.

“The transfers, especially after FY [fiscal year] 2011-2012, were patently fraudulent investments which ultimately translated into personal gains for the family member of the JDW CEO [Tareen],” it said.

Likewise, the second complaint says “voluminous withdrawals amounting to at least Rs2.2 billion were fraudulently and dishonestly made through a trusted cash rider”.

Amir Waris, employed as a cashier at the company’s corporate head office in Lahore, deposited large amounts into the personal and business accounts of Tareen and his family members.

Reports citing sources claim that Tareen and his family converted undisclosed sums in rupees into dollars from the open market and got them transferred to their foreign bank accounts.

“This modus operandi of cash-based misappropriation and money laundering was employed to break the onwards money trail of deposits into personal and business accounts of the accused Tareen and family,” the second FIR read.