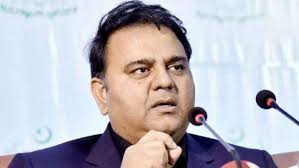 Federal Minister for Science and Technology Fawad Chaudhry clarified that Ruet-e-Hilal Committee shall be the one to make the announcement of the beginning of the holy month of Ramzan, as per the laws of the country, but stressed the need to use science and technology for effective decision making.

“The foundation of our future depends on science, technology and education and we must employ technological innovations for effective decision making,” the science minister said while speaking to media persons in Lahore.

He reiterated that the Ramzan moon will likely be sighted on April 13 and the first day of the holy month will be observed on April 14.

The statements come a day after Fawad had said that the holy month of Ramzan will commence from April 14 in Pakistan, wherein the minister had tweeted that the Ramzan moon will be clearly sighted on April 13 in Lahore, Islamabad, Peshawar and other cities.

These statements had caused controversy within the religious circles.

RHC Chairman Maulana Abdul Khabir Azad had said in a statement: “This may not be a matter of Shariah disobedience but shatters the national pride when there are different dates for commencement of Ramzan and Eids in the country.”

It is pertinent here to mention that RHC’s new chairperson was appointed by the federal government in December last year, replacing Mufti Muneebur Rehman.

The new chairperson, in January, said that he would try his best to bring harmony in observing Ramzan and celebrating Eid in the country in the years to come.

Whilst speaking on the federal minister’s statement, Maulana Azad had told a local news outlet: “Minister Fawad Chaudhry sahib should have waited for the meeting of the committee. Besides, a senior officer of the science ministry is a member of the committee.”

On Sunday, while clarifying his statements, Fawad had said that he had received a request from the religious affairs minister to allow the committee to oversee any and all announcements related to the advent of Islamic months such as Ramzan.

While acquiescing to the demand, Fawad underscored the need to incorporate science and technology into the fabric of Pakistani society, particularly that of students. He remarked, “Imagine the quality of students we may produce if we do not even teach Darwin’s theory at schools.”

“I request the provincial governments to improve their quality of education and … focus on [subjects of] science and technology.”

While reacting to internal differences between members of the Pakistan Democratic Movement (PDM), he said during the presser that the alliance which was previously against Prime Minister Imran Khan has now turned each other.

Half of the political parties in PDM support PML-N while the other half support Pakistan People’s Party (PPP), he added.