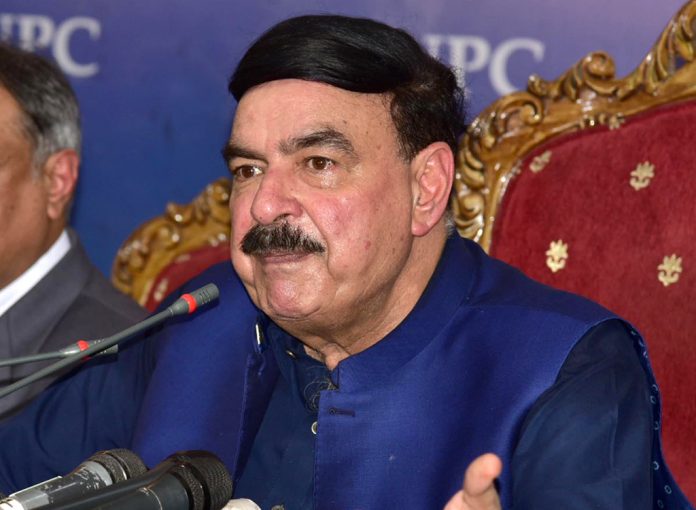 ISLAMABAD: Interior Minister Sheikh Rasheed Ahmed has said that security forces, including police, have rendered great sacrifices to restore peace in the country.
The interior minister was talking to the media at Pakistan Institute of Medical Sciences (PIMS) on Monday after inquiring about the health of the police officials injured in a firing incident in the federal capital on Sunday night.
“Yesterday, two police officials were martyred in Lahore and Islamabad,” Rasheed said, adding the terrorists have been defeated and their remnants will also be eliminated. The minister further said that the Tehreek-e-Taliban Pakistan (TTP) is reorganising in Pakistan, adding, “There are threats in Rawalpindi, Islamabad, Lahore, Peshawar, and Karachi.”
Referring to the four terrorists killed in Waziristan on Sunday, he added that the police and armed forces have been battling terrorism. “These measures will help restore peace,” he maintained.
The interior minister also announced a compensation of Rs27.5 million for the heirs of the martyred cops.
Meanwhile, Minister for Planning, Development and Special Initiatives Asad Umar also reached PIMS and inquired after the health of the injured police personnel.
Speaking to media persons on the occasion, Asad said, “The personnel were martyred while two other officials were injured in yesterday’s unfortunate incident.” He added that both the injured personnel are in a better condition at the moment. “Police are probing the incident from different angles and those responsible will be taken to task soon.” The minister further said that the police will be provided with all the resources to nab the culprits.
On Sunday evening, Race Course Police Station Station House Officer (SHO) Imran Abbas was shot dead by unidentified assailants. In another attack in the federal capital, a cop was gunned down by assailants riding a motorcycle when they were on their routine patrolling of the area.
The funeral prayers of the slain cop were offered in Rawalpindi, and were attended by the interior minister, station commander, deputy commissioner, RPO, CPO Ahsan Younus and a large number of police officials and citizens.
A floral wreath was also laid on behalf of Chief of Army Staff (COAS) General Qamar Javed Bajwa. SHO Abbas was laid to rest at the Army Graveyard, Race Course.