A citizen questions, 'Where do these traffic wardens go at night?' 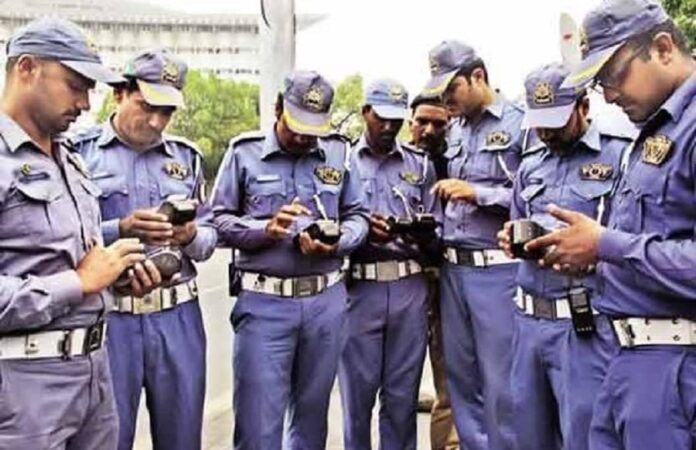 LAHORE: The Lahore traffic police have started harassing citizens in the name of challans and confiscation of vehicles instead of taking action against the real violators, Pakistan Today observed on Wednesday.

A survey found that the traffic wardens stand in groups at different roads and instead of stopping the real violators, they start harassing the law-abiding people.

Sources in the office of traffic police informed that through verbal orders, a target of every traffic warden in the department is set to issue challans of a certain amount every month so that maximum amount could be collected.

Zubair Hassan, a resident of Cantt, informed that his office is located on Jail Road. “I have to use Jail Road every day to reach my office. There is an army check post near Sher Pao Bridge, from where almost every vehicle, after proper checking, is allowed to enter the Cantt area. Whenever a person passes through this check post, he/she is always on alert. There are also some traffic wardens standing by the check post, who stop the vehicles for no reason. There is no signal and no issue of overspeeding, and the vehicles pass through at a very slow speed. But the wardens stop vehicles in the name of checking and harass people for not having papers, not wearing seat belts or sometimes using mobile phones before issuing challans.

Many people, who are with families, consider it safe to receive a challan but some people insist that they were not using a mobile phone or doing any violation. But the wardens first harass the people and then challan them without giving any logical reason. It is as if they were looking for their prey and not the violators. The higher authorities should take notice of this as this department is for the convenience of the people and not for harassing them.”

Aziz-ud-Din, a resident of DHA, also made a similar complaint, saying that he passes by the Fortress Stadium on the Mall Road almost daily and has to deal with a similar problem. He said, “A traffic warden named Mohammad Idris, whose belt number is 437 TW, seems to have a personal enmity with car owners. Idris is always looking for a prey. If someone does a violation, his challan should be mandatory, but he also issues challans without any violation, which shows that the warden is suffering from some mental stress and wants to take some revenge from the citizens.

Even with regard to the challan fee, the public is not told by the wardens that which challan will have to be paid for which amount. Sometimes, these wardens challan up to Rs200 on seat belt violation and sometimes they do not hesitate to challan up to Rs1,000 for the same violation. To date, the traffic police have not disclosed to the public the amount of challan against any violation because they have to decide the amount of the challan at their will.”

Khawar Majeed, a resident of Ferozpur Road, said that the violation of traffic rules and number of accidents on main and signal-free roads of the city are very high as the traffic wardens are not willing to enforce the rules.

“Where do these traffic wardens go at night? Is not there any violation of traffic rules at night? All kinds of traffic, big and small, on the signal-free roads and adjacent to it, including Jail Road, violate dangerously, and sometimes the wardens present there do not stop the vehicles. At night, heavy vehicles, including cars, rickshaws and motorbikes, pass through in the opposite direction at the U-turn points on the signal-free road, which is extremely dangerous but there is no one to stop them. Signals are violated at night but no traffic warden is present on duty. Overspeeding vehicles are dangerous for the whole traffic but the wardens do not speak there,” he said.

“The traffic wardens are present at different places of the roads in the form of groups and it seems like their job is not to stop people from violating, but to trap them. With the arrival of new traffic wardens, it was being expected that the system would change, but they have neither managed the pressure of traffic nor stopped the rate of accidents. They have no plan to reduce the traffic pressure during the peak hours and manage the signals on time. They do not set up training camps to familiarise the public with the general traffic rules.”

Senior Advocate Azhar Saddique said, “The behaviour of our traffic wardens is very strange. They first allow violations and then issue challans while their job is to prevent violations. Wardens stand on the corners and look for prey. Anti-corruption cases should be registered against those wardens who issue challans for fulfiling their target.”

On the other hand, the traffic police spokesman denied all such complaints and said that the task of the traffic police is enforcement, which is being done in the best possible way. “With regard to unregistered vehicles, there is a law that they cannot come on the road. The buyers should register the new vehicles from the showrooms. Wardens only challan on violations. If there will be a policy not to challan, we will not do it,” he maintained.

LAHORE: Punjab Governor Chaudhry Mohammad Sarwar on Sunday announced 1,000 scholarships for the students of erstwhile FATA after he met the protesters along with...
Read more
LAHORE

CITY NOTES: Export all the traitors!

Well, I suppose that news that we wouldn’t be importing cotton or sugar from India must be highly satisfying. But surely that must mean...
Read more
- Advertisment -