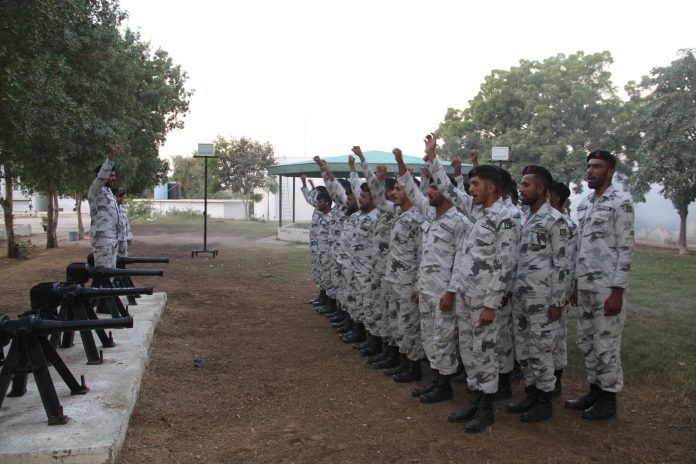 According to the Inter-Services Public Relations (ISPR), General Nadeem Raza witnessed the conduct of the maritime counter-terrorism demonstration as part of naval exercise AMAN-21. He lauded the professionalism of participants and appreciated the efforts of the Pakistan Navy in conducting the multinational exercise in a befitting manner, the ISPR added.

“AMAN-21 successfully exhibits efforts made by Pakistan in line with our vision for regional peace and stability,” the ISPR quoted the CJCSC as saying.

An impressive International Bands Display was presented by bands of the participating countries of Aman 21, aiming to connect the countries through cultural legacies. The military bands from Sri Lanka, Tri-Services of Pakistan, Sindh Rangers and Coast Guard played traditional and military tunes. The fascinating melodies were appreciated by the audience.

Besides, an enthralling special rifle drill by Pakistan Marine was also a part of the event displaying excellent performance of spins and expert manoeuvres.

Additionally, the counter-terrorism demonstration was another forceful display of strength and specialized skills by Special Operations Forces to counter acts of maritime terrorism, refine special operating procedures, exchange of professional expertise and to enhance interoperability with participating SOF teams.

The Inter-Services Public Relations (ISPR) said on Sunday that the field exercise that commenced on 28 January has focused on enhancing operational preparedness, synergy amongst various components of forces and effective response measures under actual battlefield environment.

A day earlier, the ISPR said the troops of Pakistan Army’s Karachi Corps were practising in tactical drills and procedures as part of exercise “Jidar-ul-Hadeed” in Thar Desert. The military’s media wing said the four-week long defensive manoeuvre exercise is aimed at validating the concept of defence in deserts.

“The exercise is being conducted in extreme desert conditions, 74 kilometres ahead of Chhor, under conventional operations setting,” read the statement.

The joint military exercise will further strengthen the bond of two brotherly nations and help in adapting the emerging trends in military modernisation and cooperation.

Pakistan and Turkey have increased defence and military cooperation in recent years. In July 2018, Pakistan had signed an agreement with Turkish contractor ASFAT for acquisition of four Turkish-built MILGEM corvettes.

September 26, 2021
ISLAMABAD: Eight terrorists were arrested late Saturday in separate intelligence-based operations in Punjab, the Counter-Terrorism Department said. According to the CTD, its personnel conducted an...