Strife over a statue 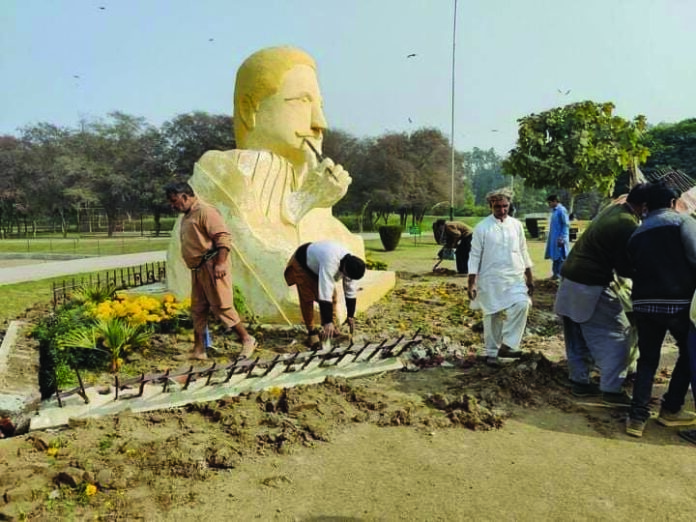 Last week turned out to be very disappointing for the much revered Allama Sir Dr Muhammad Iqbal Lahori when his home built statue was unveiled at a park named after him in a town that also carries his name. The park is run by the Parks and Horticulture Authority (PHA ) of Lahore, the city where Iqbal was educated and lived.

Probably it was here that he the dreamt about creating a separate homeland for the Muslims of the Indian-Subcontinent. Later he presented this idea in the All India Muslim League convention in Allahabad. After his health started to fail he traveled to London to convince Muhammad Ali Jinnah to return and lead the League. Jinnah with all his energy, forcefully with devotion and conviction spearheaded the movement for Pakistan.

Earlier in the decades of the sixties there was an attempt to resurrect Mirza Asadullah Khan Ghalib, the most important pillar of the Urdu language. Though Sir Syed Ahmed Khan is credited for the laying the foundations of the Muslim homeland in India by bringing Muslims into the mainstream of education and advancement but Ghalib also played a major role in this mission. Sir Syed, after retiring from the East India Company at the age of 55, wanted to help his brothers in faith. He compiled a history of the buildings built by the Muslims in Delhi. He was hoping to raise the spirits of the depressed Muslim population of the city after the failed War of Independence of 1857 in which they had greatly suffered. Ghalib died in 1869, there was a brief time overlap of these two great personalities of the Subcontinent.

Sir Syed requested Ghalib to write the foreword of his book, but instead he was advised to look ahead, not back. Ghalib suggested opening of schools and colleges to educate the Muslim population. It was this suggestion that laid the foundations of the renaissance of the Indian Muslims. Finally the Aligarh Muslim University created the critical mass of people who not only won freedom but also ensured the sustainability of the new nation.

Khawaja Moinuddin the brilliant playwright from Karachi wrote and then staged a play by the title of Mirza Ghalib Bandar Road Par. It was an instant hit. Later on it was also shown on PTV. Ghalib loved Urdu and played a major role in its development to replace Persian as the court language during the Mughal era. As Jinnah had declared Urdu the national language of Pakistan, Ghalib decided to visit Karachi the first capital of the new homeland of the Muslims. After spending a day in the city, and experiencing the plight of his beloved language, he decides to go back. Thus his journey to the new land proves to be a great disappointment. For him it was the end of his dream to see the language flourish. Perhaps he was quite concerned with the fact that no country has developed without its own language, with Pakistan being no exception. China, Japan, Germany, Turkey, Iran, Russia, Italy, all use their own language while we do not.

While the dream has turned into a nightmare, the reality has been painful for the majority of the population. Like a rudderless ship, the Titanic is headed in the wrong direction and no one seems concerned. The glaciers are clearly visible, yet the course remains unchanged. I tendered an unconditional apology to the Father of the Nation last year, now it is being extended to the national poet as well. Please let them rest in peace, and if we cannot follow their path, at least we can stop desecrating them.

After Ghalib, now it was Iqbal’s turn to be humiliated in his dreamland, the city in which he lay buried. His grandson Walid Iqbal is a sitting Senator of the ruling party. The moment his statue was unveiled, the hue and cry started at the gross desecration of the Poet of the East. Though sculpture is taught at the National College of Arts (NCA), it is not very popular form of art in the country. Only the grey statue of Prof Alfred Cooper Woolner stands proudly outside the Old Campus on the Mall. He played a key role in developing the university as a major seat of learning in the Subcontinent.

The statue of Queen Victoria was removed from the Charing Cross which was also called Malika Ka But (statue of the Queen ). It is not yet clear who authorized this project. As always the blame is passed on to the lowest level, in this case the local gardeners of the park. It is unbelievable that the entire operation was carried out clandestinely without the knowledge of the Director or Director General of PHA who sits in the old Race Club premises on Jail Road surrounded by the flowers of Jillani Park.

With the prevailing gloom and doom in every state institution, I fail to understand the role of the officers at the helm. Clearly delegation is not abdication as has been the case in the last 40 years in the land of the pure. Almost every day while driving to work at the peak hours, I find water bowsers of PHA watering plants while blocking traffic. Occasionally if not in a hurry, I stop and ask them about their mistiming. Usually I never get a proper answer but my second question is always answered; “What role do your officer play in scheduling your visits?” Invariably the answer is; “None.”

It is a perfect example of blind leading the blind towards chaos and darkness. Please educate me about the job descriptions of the DG and directors of this Authority who remain totally disconnected and clueless about the ground realities in their parks and the green belts on important roads.

Under the prevalent conditions, I will request my friend Senator Walid Iqbal to withdraw Iqbal’s dream as a mark of respect for the Poet of the East so that he could rest in peace, as perhaps it was too wishful. Jinnah’s tomb was also desecrated a few months back. I intend to write to his grandson Nusli Wadia who resides in Bombay to come and take over the security of his grandfather’s mausoleum. With Ghalib already disappointed after his Karachi visit, it only leaves Sir Syed Ahmed Khan whose museum on Atta Turk Avenue in Islamabad may be the next target of a very ungrateful nation that thrives on the humiliation of its founding fathers.

While the dream has turned into a nightmare, the reality has been painful for the majority of the population. Like a rudderless ship, the Titanic is headed in the wrong direction and no one seems concerned. The glaciers are clearly visible, yet the course remains unchanged. I tendered an unconditional apology to the Father of the Nation last year, now it is being extended to the national poet as well. Please let them rest in peace, and if we cannot follow their path, at least we can stop desecrating them.