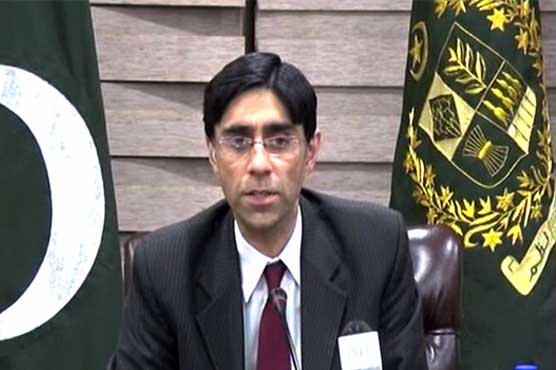 ISLAMABAD: Advisor to Prime Minister on National Security Dr Moeed Yusuf has said that India’s unilateral actions in Kashmir have paved the way for the international community to intervene and resolve the long-standing dispute.
In an interview with Turkey’s Anadolu Agency, Moeed reiterated Pakistan’s commitment to peace, including with India, but called on the world to compel India to implement international law vis-a-vis Kashmir i.e., UN Security Council (UNSC) resolutions that call for a plebiscite in the Muslim-majority region. He said, “We are dealing with a neighbour who is motivated by expansionist ideology and can go to any extent to undercut Pakistan.”
Expressing willingness to take things forward, he said: “Pakistan will take two steps if India takes one.”
To a question that many countries often don’t buy Pakistan’s narrative against India, Moeed said, “In reality, the western world wants a counterweight to China, a larger market to sell arms. So far, we haven’t got the response we think we should get, not only on the dossier but on Kashmir as well.”
Moeed said that under the BJP regime, India’s relations with all neighbouring countries, including China, Nepal, Bangladesh and Sri Lanka, are getting worse. “We have also pointed out that India is being a spoiler in Afghanistan, undermining Pakistani sovereignty and stability.”
He said, “The EU DisinfoLab’s recent disclosures are not our creation. So, it’s the EU. It’s they who have to take this on now. The EU Parliament has already held an open hearing. There is an investigation going on; it must reach its logical conclusion. It’s crucial.”
Responding to a question about civil-military relations, he said both the civilian and military leadership are working in tandem with each other, adding: “The prime minister is fully empowered to make all decisions. It is his right to call upon his military for anything and everything that is constitutional. And he uses that right. Today, civilians are empowered to decide on everything, and both civil and military leaderships are on the same page.”
He said that a narrative has been projected about Pakistan that its resources are completely skewed towards the military. “In reality, our military is grossly under-resourced, given the challenges we face.”
He said that Pakistan has a pivotal geo-economic location. “We want connectivity with Central Asia because it has major energy reserves. It’s landlocked; it wants to use our port. That’s why we want peace in Afghanistan. We are open to connectivity to the East.” He further said that Pakistan is open to providing economic bases to the entire world.
Talking about Pakistan’s relations with Turkey and Azerbaijan, the advisor said the foreign ministers of these three countries recently met in Islamabad and all three countries resolved to continue improving their relationship further. “Turkey, Pakistan, and Azerbaijan have worked closely in the past and have a good and solid relationship. This engagement is against no other country. There are common interests of connectivity, economic gains, investment and politics.”