Cost of the Afghan War

Some Perspective for Joe Biden 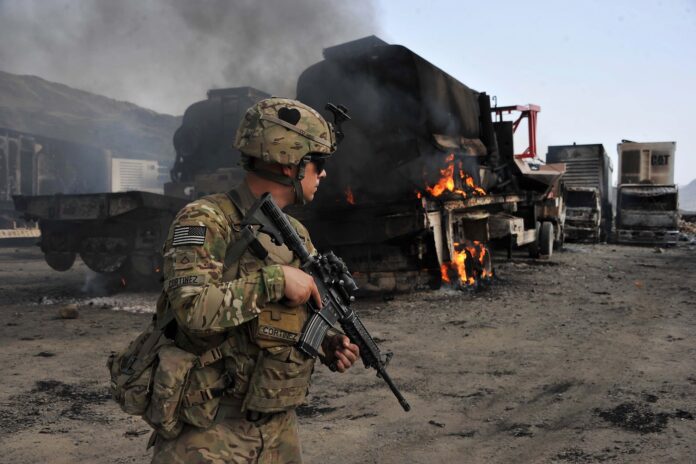 Where does the money come from for waging war? It comes from the public exchequer. In the old days, those who were defeated in the wars were required to pay the winning side as compensation. In the case of Afghanistan, there will be no compensation. So far, the USA has spent more than $ 1.5 trillion on fighting a war.

How will the US. government get compensated, is the real question. It was believed that once the occupation of Afghanistan is materialized, the natural resources will be exported to encash the war expenditure. That is why the U.S. government allocated a hefty sum of $ 24 billion for establishing projects such as mineral extraction and infrastructure construction but no investors participated, and no labour was willing to work despite the provision of funds. Without establishing law and order and the writ of the government, no such project materialized successfully.

How was the Taliban getting funds to fight the war? The US policymakers found out that the Taliban’s funds also came through the contractors in Afghanistan, mostly European firms, who paid protection money to the Taliban to ensure that their supplies reached their destinations safely. That is why many such companies are being sued by the next kin of deceased US soldiers. Their contention is that these firms funded those terrorists fighting against the US Army and ultimately killed their beloved ones. Any mobilization cost, supplies of food, weapons and so on, will have to be paid to the locals for protection to reach the bases in Afghanistan. Therefore, without the Afghan territory’s control, the suppliers were bound to pay to those controlling the territory.

An effort to establish a compliant Afghan government after abrogating peace agreement with the Taliban would be painful for the military and economies besides Afghanistan’s. The Taliban’s reaction would be obvious, to go for the continuation of a war which they have apparently won. The policy of rapprochement is better than the policy of conflict.

Another requirement to continue war is the provision of trained manpower. The US government spent $87 billion for providing training and equipment for the Afghan army’s capacity building. It included their salaries: outfitting and salaries. The outcome remained dismal as at least 33 percent of the recruits used to get trained, earn a salary for some time, and run after some time. These would turn out to be Taliban. Therefore, about $29 billion (33 percent) were used to train the Taliban without government control.

Therefore, the Obama Administration announced a withdrawal from Afghanistan in 2014. President Joe Biden was Vice-President at that time. While addressing the US Military Academy, at West Point, on 1st December 2009, President Barack Obama said, “The days of providing blank cheques are over…. It must be clear that Afghans will have to take responsibility for their security and that America has no interest in fighting an endless war in Afghanistan.”

Moreover, the casualties in Afghan security continued to rise, which stands at 45,000 so far. This caused demoralization and a lack of confidence in their capabilities and the abilities of their rulers. The challenges were more pressing when absconders used to join the opposing side, thereby at the same time strengthening them, reporting sensitive information and exposing the US forces’ weaknesses. Several incidents occurred where US soldiers were killed by ‘friendly fire’ from afghan security forces.

The cost of an American casualty is exorbitant. The pension and post-casualty expenses of 2500 killed, including one major general, are not clear. However, the amount of money already spent for the care, medicines and pay etc., for those soldiers who became war wounded or invalid is $350 billion. The total expenditure forecast for them till 2059 has been estimated to be $ 1.4 trillion. Therefore, the affordability of further fighting war in Afghanistan raises serious apprehensions among US citizens.

A sum of 30 billion was allocated for the reconstruction of hospitals, schools and bases. In 2008, a review on this programme was conducted by te Chief Inspector General for Afghan Reconstruction (CIGAR). It was analyzed that the objective of this programme was not clear. Today, there are bases constructed, but they are not effective; there are hospitals, but no patients, and schools’ buildings but no students. The rate of child mortality has increased in the international standing. Although the American authorities blamed the Afghan government for lack of willingness, capacity, and rampant corruption, the fact remained that the money spent came from the American public exchequer and raised concerns.

Several parameters were analyzed to access success in the Afghan war. These included personnel trained, number of violent accidents or even area under control. All parameters indicated disappointing figures indicating loss of the war. Investigations held by the government agencies for the inability to achieve success in Afghanistan were demanded public consumption. Some extracts were provided on the courts’ direction, which brought out the amazing facts indicating a failure in Afghanistan. US authorities were indeed aware of these pitfalls before they walked into Afghanistan. While addressing at the Virginia Military Institute on 17 April 2002, President George w. Bush said, “The history of military conflict in Afghanistan (has) been one of initial success, followed by long years of floundering and ultimate failure. We are not going to repeat that mistake.”

The new President wants to delay the US pullout. It will increase the defense budget for regular army, navy and air forces. War funds will be consumed for mere deployments and demoralize an army with personnel some of whom have completed three tenures in the war zones, indicating a saturation of human resource. It is up to the US government to continue to take responsibility for Afghans’ security, for which they were never invited.

Reimbursement of war expenditures will remain a far cry for the new administration, not to think of success. An effort to establish a compliant Afghan government after abrogating peace agreement with the Taliban would be painful for the military and economies besides Afghanistan’s. The Taliban’s reaction would be obvious, to go for the continuation of a war which they have apparently won. The policy of rapprochement is better than the policy of conflict.

Muhammad Sohail Ahmed
The author is a freelance writer and a retired commodore of the Pakistan Navy, and can be reached at [email protected]

That Prime Minister Imran khan has gone into conniptions is unfortunate. Finance Minister Hafeez Sheikh’s defeat in the Senate election must have come as...
Read more
Editorials

That the Biden Administration intends to give India the same special treatment that its predecessor, the Trump Administration did, and ignore the way it...
Read more
Comment

In India, dominated by politicians from the Hindi heartland, Hindutva (Hindu Nationalism) has been using brutal force mercilessly against any move to free Assam,...
Read more
Comment

After the thrilling episode of the Senate elections the political temperature in Pakistan is quite high. The game changing victory of Yousuf Raza Gilani...
Read more
Comment

India and Pakistan reached a ceasefire arrangement at the Line of Control (LoC) and 8n all sectors with effect from midnight February 24/25, 2021. It...
Read more
Comment

The Upper House by secret ballot

AT PENPOINT Does the action by the Election Commission of Pakistan on the NA 75 by-election, in which the poll was countermanded and fresh polling...
Read more