Militants had attacked a military convoy in October last year 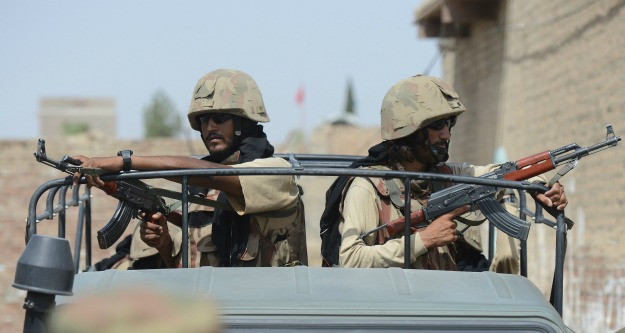 While two terrorists were killed, another was injured during the intelligence-based operation (IBO) in the Nargosa town of the district.

“Security forces conducted an IBO in Nargosa area of South Waziristan district. During [an] intense fire, two terrorists Usman Ali and Waheed were killed and one got injured and apprehended,” the ISPR said through a statement.

“The killed terrorists were active members of Tehreek-e-Taliban Pakistan Sajna group and were improvised explosive device (IED) experts, terrorist trainers, motivators, and were involved in attacks on security forces.”

“Terrorist Usman was also involved in the attack on security forces on Oct 14, 2020 in which Capt Umer Cheema, two JCOs and three Soldiers were martyred while four were injured,” the statement added.

The Afghanistan-based terror group is involved in a number of attacks on the army. In the October attack, a convoy of security forces was attacked with improvised explosive devices near Razmak, resulting in the martyrdom of a captain and five soldiers. The TTP had claimed responsibility for the attack.

The militants, most of them are based in Afghanistan and sponsored by India, have stepped up attacks on security forces in the merged tribal districts, particularly in North Waziristan and South Waziristan, raising fears of a revival of their insurgency and a return of lawlessness as brighter prospects for peace in Afghanistan herald shifting alliances.

The border region was for years a haven for militants who fled the US invasion of Afghanistan in 2001. But the Pakistan Army cleared out the strongholds in a 2014 offensive, Operation Zarb-e-Azb, driving most of the terrorists into Afghanistan.

But since March, al Qaeda-linked TTP, facing the risk of losing havens on the Afghan side of the border if their Afghan Taliban allies make peace there, have unleashed a wave of attacks on the security forces in the border region.

KARACHI: The Sindh government on Sunday imposed a general quarantine across the province to curtail the spread of the coronavirus. The restrictions targetted travel and...
Read more
NATIONAL

ISLAMABAD: The Pakistan International Airlines (PIA) airlifted yet another consignment of one million doses of Sinovac Biotech vaccine from Beijing. “More flights of the national...
Read more
NATIONAL

Will explore legal options against bail granted to Shahbaz: Fawad

ISLAMABAD: Minister for Information and Broadcasting Fawad Chaudhry on Sunday said the government will explore legal options against a court order that paved the...
Read more
NATIONAL

Eidul Fitr on May 14, Fawad says

ISLAMABAD: Minister for Information and Broadcasting Fawad Chaudhry on Sunday announced Eidul Fitr will be celebrated on May 14 but called on the people...
Read more
NATIONAL

ISLAMABAD: The coronavirus claimed 118 more lives nationwide over the last 24 hours, pushing the death toll to 18,915 on Sunday. According to the National...
Read more
- Advertisment -

Eidul Fitr on May 14, Fawad says

May 9, 2021
ISLAMABAD: Minister for Information and Broadcasting Fawad Chaudhry on Sunday announced Eidul Fitr will be celebrated on May 14 but called on the people...