Final decision over the matter to be taken on Monday 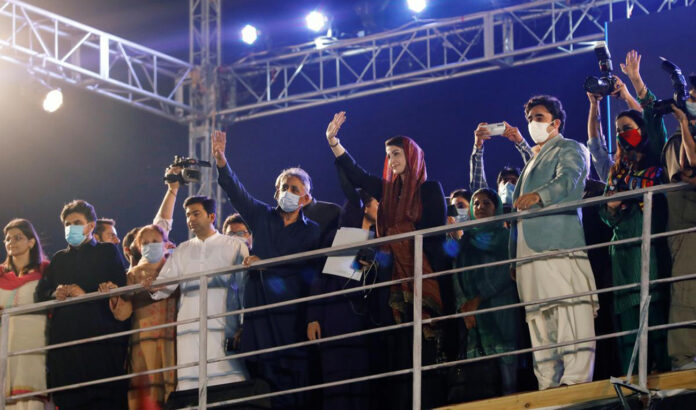 ISLAMABAD: Pakistan Democratic Movement (PDM) will hold a meeting of its steering committee at the residence of its president Maulana Fazlur Rehman in Islamabad on January 18 (Monday).

The meeting is expected to take a decision on a proposal to defer further rallies and public meetings due to harsh weather conditions, according to sources.

Some PDM parties have suggested to postpone the anti-government public meetings till February due to severe cold and foggy weather in Punjab, sources said.

The sources further claimed the Pakistan Muslim League-Nawaz (PML-N) and some other PDM parties have also proposed to defer a scheduled rally in Sargodha. A final decision over the matter is will be taken during the session where PML-N Vice President Maryam Nawaz will also participate.

At the meeting, the member opposition parties would finalise the plan to stage a protest outside the offices of the Election Commission of Pakistan (ECP) in Islamabad on Tuesday.

Members of the committee have been directed to ensure their presence in the meeting at 12:00 pm.

The rally was being organised to “get a decision from the ECP [on PTI foreign funding case] that it is not giving since 2014”, According to PML-N spokesperson Marriyum Aurangzeb last week said.

The case was filed in November 2014 by Akbar Babar, a founding member of the ruling party.

Last week, PTI that has denied any illegal funding from the United States, said if any funds were collected illegally through two US companies registered after then party chairperson Imran Khan’s written instructions, the responsibility lies with their agents managing the two limited liability companies.

“The protest [is being done] to take the decision that has already been made today when the PTI has accepted that illegal funding could have been done through agents,” Aurangzeb said.

“[The PTI] accepted that money was gotten illegally through 23 foreign funded accounts that were not declared accounts and that money was [deposited] in PTI accounts [through cheques],” she declared, claiming: “Signs of President [Dr Arif Alvi], Sindh Governor [Imran Ismail] and Imran Khan himself [along with] other PTI leaders are present on those cheques.”

Meanwhile, Minister for Interior Shaikh Rasheed Ahmed will chair a meeting on Monday on the proposed PDM protest outside the ECP offices in Islamabad.

Islamabad police chief, chief commissioner and the representatives of law enforcement agencies will attend the session. IGPs of Punjab and Khyber Pakhtunkhwa (KP) will also attend the meeting via the video link.

The meeting will review the necessary security measures made for the protest.

Prime Minister Imran Khan had earlier allowed the protest and also directed Ahmed not to create any hurdle in its way. However, he had issued orders to take action against those violating the law.