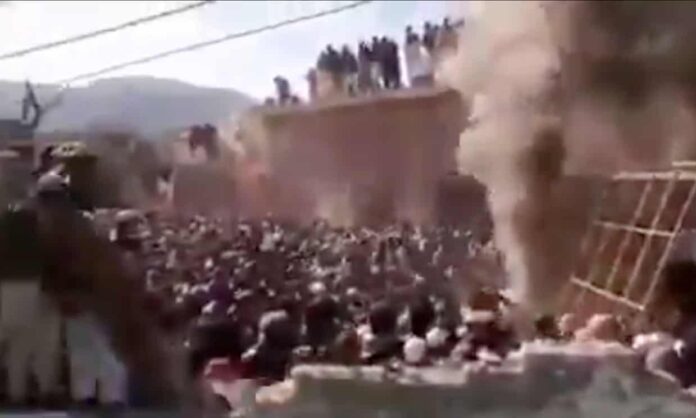 ISLAMABAD: Pakistan has rejected “unwarranted” Indian assertions on the burning down of a historic Hindu temple in the Karak district of Khyber Pakhtunkhwa.

On Wednesday, a crowd of thousands, reportedly led by Jamiat Ulema-i-Islam-Fazl’s (JUI-F) KP chapter leadership, descended on the samadhi (shrine) of a Hindu saint, Shri Paramhans Ji Maharaj, and vandalised it before setting it on fire.

Subsequently, on Friday, KP chief minister Mahmood Khan announced his government will reconstruct the shrine considered sacred by the Hindu community and popular among devotees, especially from Sindh.

Responding to the development, India’s Ministry of External Affairs (MEA) expressed “serious concerns” over the incident while claiming “repeated instances” of incidents of “similar nature”.

However, the Foreign Office was quick to spot the hypocrisy. “This is not the first time the Indian government has tried to feign concern for minority rights elsewhere, while being the most egregious and persistent violator of minority rights itself,” FO spokesperson Zahid Hafeez Chaudri said through a statement.

As a perennial purveyor of state-sponsored discrimination against its minorities, India is in no position to pontificate on issue of minority rights. India would be well advised to set its own house in order rather than feigning concern for elsewhere.
🔗 https://t.co/fEuWDjvqxc pic.twitter.com/90VNcIeNTH

“From the discriminatory Citizenship Amendment Act to the National Register of Citizens (NRC), from the Gujarat massacre of 2002 to the Delhi pogrom of 2020, from the reprehensible demolition of Babri Mosque in 1992 to the despicable acquittal of all the accused by [an] Indian court in 2020, from blaming Muslims for spreading coronavirus to banning of inter-faith marriages, from cow vigilantism and mob lynchings to terming the Muslims of West Bengal termites and threatening to throw them into the Bay of Bengal, from extra-judicial killings of innocent Kashmiris to blatant attempts to turn Muslims into a minority in occupied Kashmir through [the] distribution of fake domicile certificates, the RSS-BJP regime’s record is replete with instances of gross and systemic violations of the rights of minorities, in particular Muslims,” it added.

The statement said that as a “perennial purveyor of state-sponsored discrimination against its minorities, India was in no position to pontificate on the state of minority rights elsewhere”.

The spokesperson further said that there was a clear difference between the state of minority rights in India and Pakistan based on the fact that the accused in the Karak incident were immediately arrested, orders were issued for restoring the temple, the highest level of judiciary took immediate notice, and the senior political leadership condemned the incident.

“Whereas in India, blatant acts of discrimination against Muslims and other minorities take place with state complicity. The Indian leadership is yet to condemn the perpetrators of the Delhi massacre in February 2020, let alone bring those criminals to justice,” the statement said, referring to violence in the Indian capital that claimed the lives of at least 50 people mostly Muslims.

“Given these incontrovertible facts, the Indian government would be well advised to set its own house in order rather than feigning concern for minority rights elsewhere.”