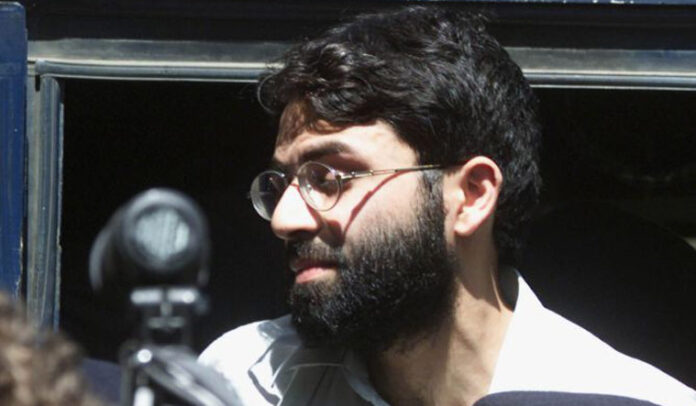 WASHINGTON: The United States Justice Department released a statement on Wednesday, thanking Pakistan for its appeal against a Sindh High Court (SHC) order acquitting prime suspect in the 2002 beheading of the Wall Street Journal reporter Daniel Pearl.
Last week, the SHC declared “null and void” the detention of Ahmed Omer Saeed Sheikh in the case. The court in April turned the death sentence awarded to Sheikh in a seven-year jail term in addition to acquitting other three suspects — Fahad Naseem, Salman Saqib and Sheikh Adil — earlier handed life sentences.
However, the Sindh government has opposed Sheikh’s release, saying it would endanger the public. He was to remain in custody until the separate appeals from the government and Pearl’s parents in the Supreme Court are resolved.
The verdict was announced on an appeal from the family of Sheikh against his detention despite the acquittal. In its verdict, the court ordered the immediate release of Sheikh and other suspects but said their names be added to the Exit Control List (ECL).
The men have been in rotting in jail for 18 years without committing any crime, the judge said.
“We understand that Pakistani authorities are taking steps to ensure that Omar Sheikh remains in custody while the Supreme Court appeal seeking to reinstate his conviction continues,” a statement issued from the office of acting US Attorney General Jeffrey A Rosen said.
“The separate judicial rulings reversing his conviction and ordering his release are an affront to terrorism victims everywhere.”
“We remain grateful for the Pakistani government’s actions to appeal such rulings to ensure that he and his co-defendants are held accountable. If, however, those efforts do not succeed, the United States stands ready to take custody of Omar Sheikh to stand trial here.”
“We cannot allow him to evade justice for his role in Daniel Pearl’s abduction and murder.”
Pearl, 38, the South Asia bureau chief for the publication, was abducted on January 23, 2002, in Karachi and beheaded the next month, reportedly by Al-Qaeda. Sheikh had been convicted of helping lure Pearl to a meeting in Karachi in which he was kidnapped.
Prior to his kidnapping, the journalist had been investigating the link between reportedly Pakistan-based militants and Richard Reid, the notorious “Shoe Bomber” who attempted to blow up a flight from Paris to Miami with explosives hidden in his shoes.
In July 2002, following the hearings, an anti-terrorism court (ATC) in Hyderabad had sentenced to death Sheikh and life term to other co-accused. However, all four convicts had moved the SHC in 2002 challenging their convictions.
In his autobiography, In the Line of Fire: A Memoir, former president Pervaiz Musharraf had claimed that Sheikh, a British national and a student at the London School of Economics (reports claim that he did not graduate), was hired by MI6 to engage in “jihadi operations”, adding that “at some point, he probably became a rogue or a double agent”.