Despite the pandemic, Careem managed to have a record year in Pakistan 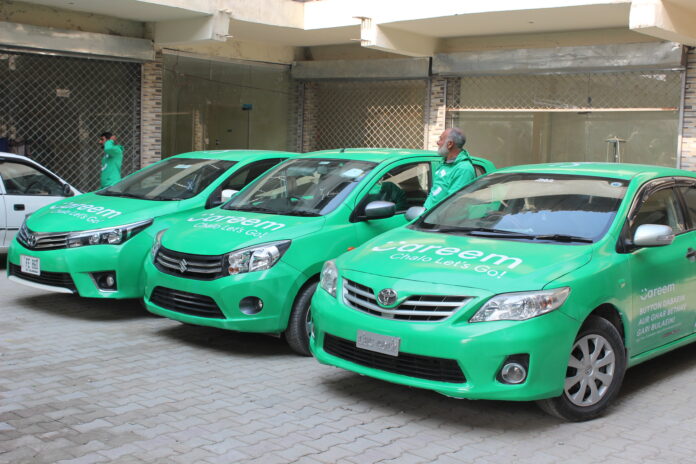 Logic would dictate that the year 2020 would be devastating for a ride hailing app. And in many ways, It was. The coronavirus pandemic resulted in Careem laying off 31% of their global team (not their drivers, the actual full-time staff). When the pandemic first hit, things looked bad and they looked like they could only get worse considering the company lost approximately 80% of its business. It was absolutely horrible and one would assume there was no hope. The Careem management team, led by Karachiite Mudassir Sheikha, begged to differ.

While the lockdown reduced mobility, Careem thought on its feet and evolved to become the one thing that no other business was able to successfully pull off in Pakistan, becoming a super app.

“The year 2020 confronted our business with extremes and challenged us to move from our comfort zones; nonetheless, it also provided us with the opportunity to grow our services and further simplify and improve the lives of our customers,” said Zeeshan Baig, CEO and general manager for Careem Pakistan, in a press release about the business’ trends in 2020.

Careem launched its super app in early 2020, with the aim of expanding its services beyond ride-hailing. It wanted to not only help individuals get from point A to B but also allow customers to order food delivery (which grew rapidly during the pandemic), request grocery deliveries, other deliveries, and digital payments. Basically, the product was just the thing one needed to stay socially distant and yet connected in the physical world. 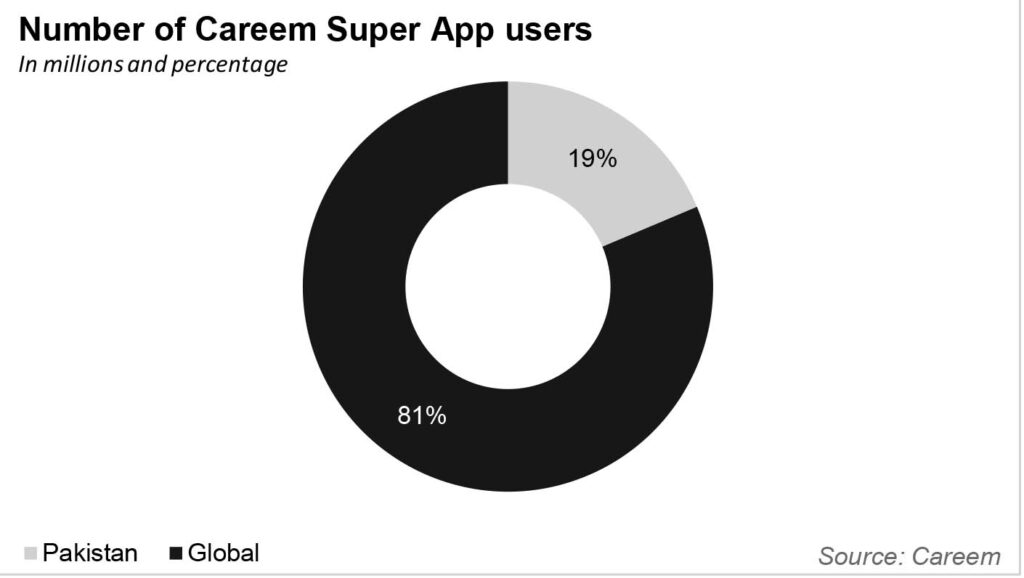 This is by no means a unique concept. Indeed, it was invented by China’s Tencent, which owns the WeChat app, ubiquitous on smartphones in the world’s second largest economy. And even in Pakistan, Careem is not the only company to try this strategy, nor even the only ride-hailing company to try it. Bykea offers a similar service, but it caters to a vastly different market, usually lower income, and thus with lower ticket sizes per use.

Careem, however, appears to have been remarkably successful at implementing its super app strategy, something that many other companies have failed at in the past.

While the early lockdown period had been devastating for business, Careem feels that they were able to make a speedy recovery across verticals, and the super app in particular helped the company deepen its relationship with its existing user base. The company reported that the average number of services per customer per week had risen by 7 times since the pandemic began, rising to 3 per week for its active user base.

Careem states that it has 11 million registered users in Pakistan, or nearly a quarter of the 48 registered million users worldwide. Registered users, however, are not the same as ‘active’ users, and the two numbers can often be vastly different, with active users generally being a small subset of registered users.

The company also stated that approximately 19% of all Careem customers, and 23% of Careem captains are in Pakistan. In interviews with Profit conducted in June, Careem management had said that they aim to have 1 million registered drivers by the end of 2020. In December, they acknowledged that they have not been able to achieve that goal.

“As the world was told to stay home, the Careem customers’ needs shifted away from travel to deliveries, Careem saw a spike in the usage of the delivery service, with special instructions shared by many users,” said Baig. 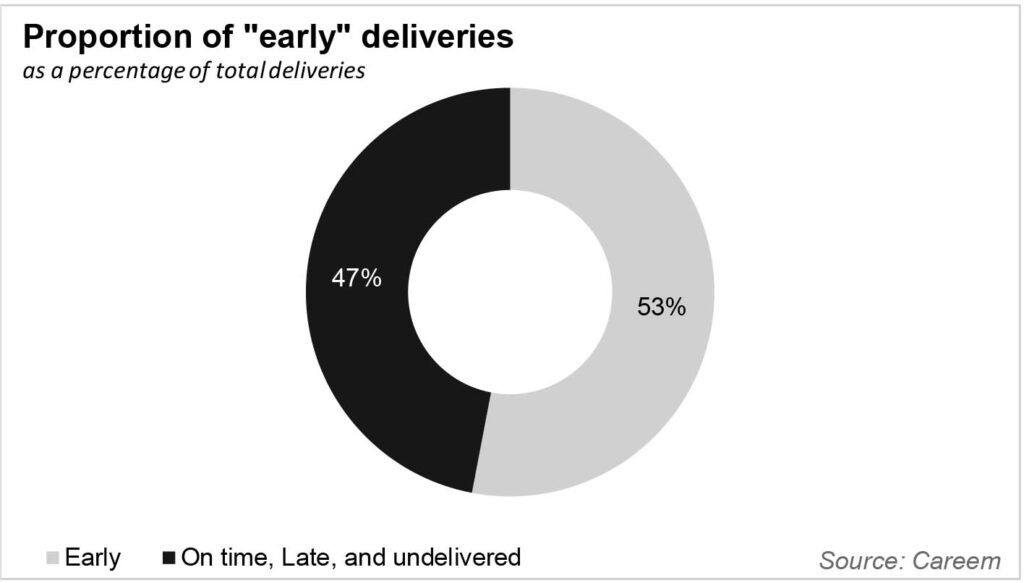 Movement of people grew 12 times since the April trough, whereas the movement of things such as food and general deliveries increased by 10 times. While Careem does not reveal the actual growth number for movement of money, they claim that it grew by double digits. The numbers for the increases in movement of people, it is important to note, are relative to the worst of the pandemic, when its aggregate business had declined 80% or so. Even so, to have a bounce back that sharp, is quite impressive.

Careem’s delivery business has been growing over the years too with the average bill rising Rs 110 in 2018, to Rs122 in 2019, and Rs 181 in 2020 (until June). Considering the pandemic, it is assumed that Careem was able to end the year with a higher average.

This year Careem ventured into the food delivery space and put up a tough fight with Foodpanda where the highlight that stands out is Careem swooping in restaurants and vendors when they had disagreements with Foodpanda.

In an ongoing war with Foodpanda to establish dominance in the food delivery space, Careem Pakistan has announced that it has reduced restaurant commission fees to a fixed 5% from the previous 15-20%. Careem announced a 15-20% commission in September during the All Pakistan Restaurant Association strike against Foodpanda.

Careem feels that the reduction in commission fees will allow Careem to extend the necessary support to restaurants by passing down these commissions in form of discounts to customers, while encouraging increased orders. 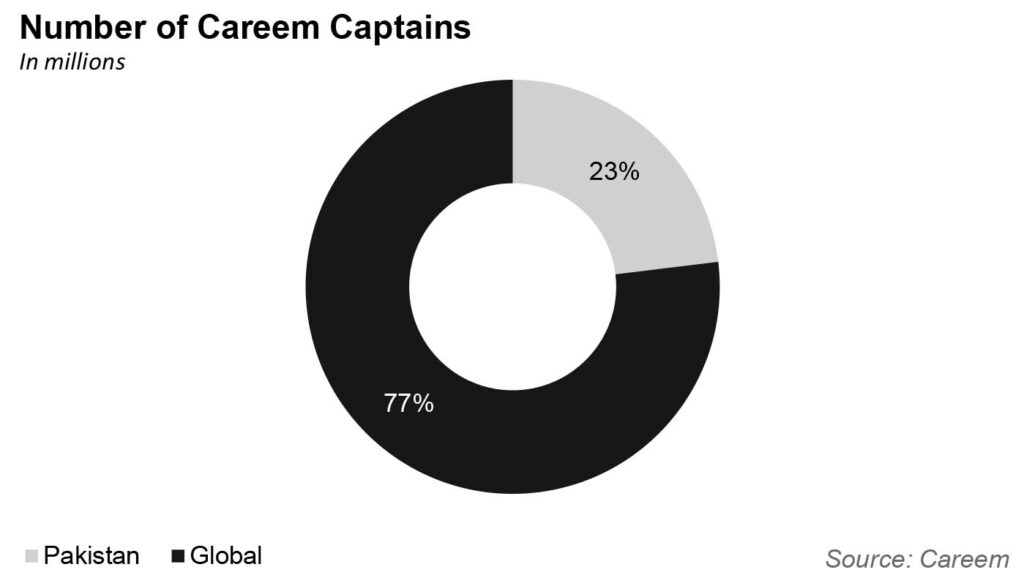 “The Careem Captains and our restaurant partners are at the heart of the business, and Careem will continue to support them.”

Interestingly, Careem also reveals that the most “ordered” food on the app is Pizza, and 53% of all food orders arrived early. They do not mention the proportion of late orders though.

While Careem will be able to build better rapport with restaurants, it is not clear how long they can sustain their aggressive pricing tactics against Foodpanda. A 5% commission in the delivery space is little to nothing when considering the expenses incurred. However, given the fact that the company effectively controls the entirety of the ride-hailing business, it may have the capital to divert towards achieving a similar dominance in the delivery business.