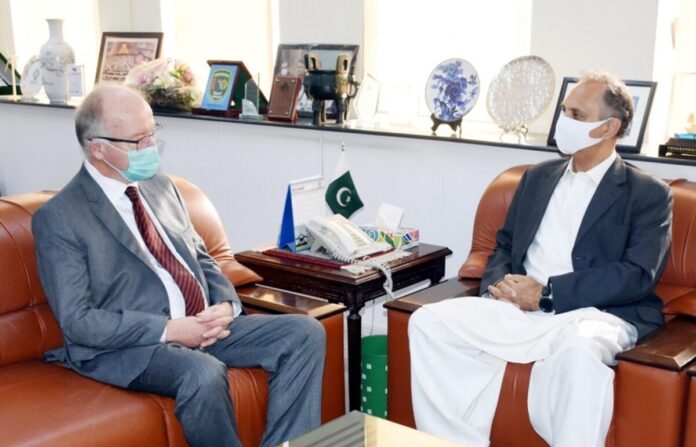 ISLAMABAD: Ambassador of the Kingdom of Norway to Pakistan Kjell Gunnar Eriksen on Wednesday appreciated the newly promulgated Renewable Energy Policy of Pakistan, expressing hope that his country would soon forge cooperation with Pakistan in the field of renewable energy.

In a meeting with the Federal Energy Minister Omar Ayub Khan at his office in Islamabad, the ambassador apprised the minister of the ongoing Norwegian projects in the energy sector.

Both sides deliberated upon the outlook of Pakistan’s energy market and business opportunities in view of the newly approved Alternative Energy Policy.

Speaking on the occasion, Omar Ayub Khan informed the envoy that Pakistan has embarked upon taping the huge indigenous potential of renewable energy.

He said the government has set an ambitious target to introduce 25pc renewable energy by 2025 and 30pc by end of 2030, besides 40pc share of hydel power generation into the energy mix of the country.

The minister said that Pakistan’s new Renewable Energy Policy would bring opportunities for investors due to the transparent policies of the current government. He further informed that the government would induct renewable energy-based power plants through open and competitive bidding in a transparent manner.

In addition, the government would encourage the transfer of technology in these projects, he added.

The minister said that the government is focusing on the manufacturing and assembly of wind turbines and solar panels in Pakistan.

January 19, 2021
KHAIRPUR: The local police have arrested the prime suspect in the rape and murder case of a seven-year-old girl on Tuesday. The arrest was announced...