The Hindutva fascist regime: An Overview

The RSS S is attacking on several fronts 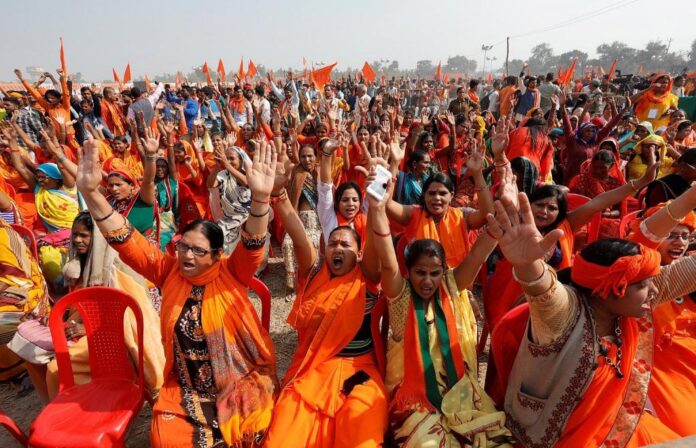 Hindutva is an ethnic form of nationalism. Since 1925, the right-wing Hindu nationalist paramilitary organization Rashtriya Swayamsevak Sangh (RSS) has been its staunchest supporter. The RSS is essentially far-right, hierarchical, authoritarian and based on Hindu supremacy. Hindu nationalism seeks homogeneity through the imposition of the Hindi language, Hindu religion, Hindu mythology, and unquestioning loyalty to the nation. At various levels, it seeks to suppress dissenting views and exclude religious pluralism and secularism from political discourse.

The current right-wing Prime Minister Narendra Modi, an active member of the RSS, is famous for his involvement in the 2002 post-Godhra riots. Modi has claimed that the train fire that killed 59 Hindus was an act of Islamic terrorism rather than an outbreak of communal violence.

Under Modi’s leadership, India is fulfilling the Hindutva mission of the RSS to make India a Hindu nation. Once a secular state, India has become an electoral autocracy, with Hindutva as its unofficial ideology.

If Western nations really want to save liberal democracy, they should isolate authoritarian leaders like Modi and condemn his illiberal policies. Doing so is the only way to save a dying democracy like India

After the 2014 election, gau raksha (cow protection) to ban cow slaughter and processing of associated products also garnered media attention. Vigilance groups were activated to try to enforce a ban on cow slaughter, leading to many cases of public lynching of cow traders and those who traded in meat products.

Incidents of communal violence and resulting deaths have increased annually since 2014 in both BJP-ruled and non-BJP states, although there are some indications that in the latter, before the election, BJP activists had an incentive to encourage community violence. As the Human Rights Watch (2018) report on India noted, ‘vigilante violence targeting religious minorities, marginalized communities and government critics, often carried out by groups claiming to support the ruling BJP, became a growing threat in India in 2017.’

But perhaps the main site of violence against minorities was Kashmir, where hardline government policy instigated the current insurgency and the series of events that led to the Pulwama incident.

Furthermore, despite formidable opposition, the BJP government has begun to erode the architecture of special regional and minority rights built into the constitution. An attempt has been made to amend Muslim personal law with a ban on triple talaq; and the Law Commission was directed to review the proposed Uniform Civil Code as part of its broader consultations on changes to minority personal law. Article 35A of the Constitution, which grants Kashmiri residents special protection in terms of government employment, provision of services and land acquisition, is currently under review by the Supreme Court.

Minority institutions (religious organizations, trusts, educational establishments) have increasingly become the object of control, infiltration, and new regulations. Religious minorities in India today, as the US Religious Liberty Commission (2018) concludes in its 2018 Annual Report, ‘face challenges ranging from acts of violence or intimidation, to loss of political power, to a growing feeling of disenfranchisement and ‘otherness’.

Amnesty International echoed these conclusions and, in a comprehensive report on human rights, religious freedom, liberty and government inaction, summarized as follows:

‘Minority religious groups, particularly Muslims, faced increasing demonization from hardline Hindu groups, pro-government media and some state officials… Authorities openly criticized human rights defenders and organizations, which contributed to creating a climate of hostility against them. Mob violence intensified, including by vigilante cow protection groups. Freedom of the press and freedom of expression in universities were attacked. India did not respect its human rights commitments made before the UN Human Rights Council. The Supreme Court and High Courts handed down several progressive rulings, but some rulings undermined human rights..’

The government’s indifference to such transgressions led Ganguly (2015) to suggest that it “may well be seeking to usher in a new social order, one that privileges India’s dominant Hindu community over all others.” a desire to reshape state institutions in the image of Hindu nationalism. Government funded schemes have been renamed in celebration of Hindutva icons; education policy, especially at the state level in BJP-ruled states, has been used to revise curricula, textbooks, and extracurricular activities to instill a sense of Hindu nationalist pride; and the ceremonial functions of the state have been saturated with Hindu language and icons to undermine, if not obliterate, any claim to representation of a plural and secular form of government.

Although the BJP has been prevented from completely changing the state and constitution by the absence of a majority in the Upper House and an overwhelming majority in the Lower House of Parliament, this has not frustrated its efforts to use executive power to subvert or control power.

The Supreme Court, for example, witnessed an unprecedented fight between the Chief Justice of India, who was allegedly complying with government orders, and four judges of the court over the allocation of politically sensitive cases which, according to the allegations, the Chief Justice was hiding from his colleagues.

Similarly, the independence and regulatory functions of the Reserve Bank of India (RBI) have been systematically undermined, notably through erratic policies such as demonetization and the use of RBI reserves to bolster the RBI’s own government balance.

The Central Surveillance Commission, which oversees the CBI and the central administration, was headed by a BJP loyalist accused of being involved in high-profile corruption cases. University governing bodies and other academic institutions, traditionally bastions of dissent and radicalism, including Jawaharlal Nehru University (JNU), have been filled with BJP/RSS ideologues, with the clear aim of reshaping the aims of educational institutions. These efforts to control independent state institutions that play a vital role in maintaining impartiality reflect a desire to limit, if not erase, autonomous institutions and spaces.

If in the past the appeal of Hindu nationalism rested mainly in the sphere of culture, since 2014 the BJP has ensured that, by building a system of government in its own image, the power of the state is fully used both to consolidate the process so as to marginalize its opponents. Thus, in giving a broader sense of this development, to Hindu nationalism in power, rather than focusing on the gap between the party’s manifesto and its achievements, a more relevant exercise is to offer interpretive analysis of how the experience can be better understood.

It is to these conflicting explanations that we turn now. However, the open resistance to Hindutva is evident in different forms and at different levels. Farmers, students, intellectuals, religious minorities, India’s main opposition party and members of civil society have risen up to protest against the policies of Modi’s Hindutva government.

Even among Hindutva supporters, an invisible opposition to Hindutva fascism is also taking shape in private discourse. Hindutva may be dominant, but it has begun its gradual decline.

In 2005, the USA banned Modi from entering India after he failed to take action against anti-Muslim riots in India. However, when Modi became prime minister in 2014, Western leaders treated him with a red carpet, presumably to further business interests. Once Hindutva gained respectability in the West, he raised the morale of his followers and discouraged resistance.

If Western nations really want to save liberal democracy, they should isolate authoritarian leaders like Modi and condemn his illiberal policies. Doing so is the only way to save a dying democracy like India.