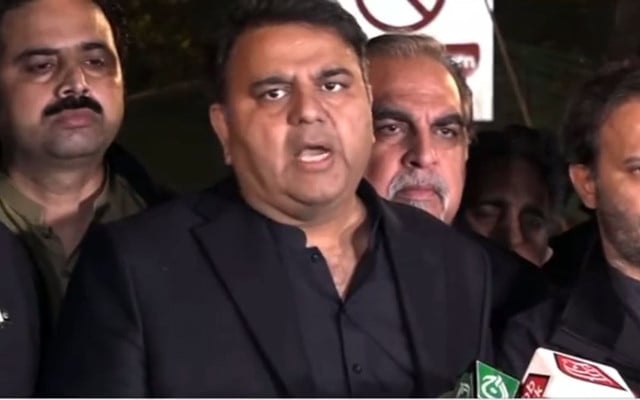 “The date of dissolution will be announced after consultation with the parliamentary party,” he told media persons in Lahore.

Over the weekend, PTI chief Imran Khan — in a mammoth gathering in Rawalpindi — had announced his party’s intention to disassociate itself from the “current corrupt political system” by quitting the assemblies of KP and Punjab.

However, a final decision would only be taken after consultations with chief ministers in both provinces, while a final decision in this regard would be made after a meeting of the PTI’s parliamentary party, Imran had said.

Later, Punjab Chief Minister Chaudhry Pervez Elahi had brushed aside concerns of any resistance from him regarding PTI’s plan, acknowledging that he owed his government to Imran and would oblige to his instructions immediately.

In a media talk today, Fawad Chaudhry said that the PTI chief had met KP Chief Minister Mahmood Khan on Monday and had a meeting scheduled with Punjab’s Elahi today (Tuesday).

“The process of allotting tickets has begun […] 563 seats from across the country will be vacated and elections will be held on them. On Friday, a meeting of the Punjab parliamentary party has been scheduled, while a meeting in KP has been called on Saturday,” he said.

“After these meetings, the assemblies will be dissolved,” the PTI leader asserted, saying that the party would also tender resignations in the Sindh and Balochistan assemblies.

“We have written to the National Assembly speaker regarding our resignations as well,” he said.

Chaudhry also stated that the opposition would also be invited to hold consultations with the government in both the provinces over the formation of the interim government.

“We still want to go ahead with general elections […] be it 7 or 8 months and PTI will win for sure.”

The PTI leader then called on the government to announce the date for general elections and dissolve the National Assembly. “If you don’t, then the PTI will dissolve the assemblies wherever it rules.”

“We are here to save Pakistan [from default] and we will save it,” he added.

Fawad Chaudhry said that with resignation by PTI lawmakers, 64 per cent of the seats in all assemblies would fall vacant.

They PDM, he said, won’t agree to hold immediate elections but the PTI would compell them to do so. Fawad said it won’t make any difference if no-confidence motions are introduced in provincial assemblies.

Meanwhile, Pakistan Tehreek-i-Insaf (PTI) Central Secretary General Asad Umar lashed out at the imported government for destroying the industries in short span of six months due to its flawed short term cosmetic measures.

In a statement on Monday, PTI Secretary General said that the imported government ruined the IT industry, which was growing at more than 30%, now with zero growth.

Asad Umar stated that he met two guys one from the IT sector and another from textile.

He said that they both narrated horror stories of the devastation that has destroyed their industries in the last 6 months.

“The future of the country made hostage to the greed and ambition of a corrupt elite,” he added.

He stated that to artificially control dollar rate and payments against contracts are being withheld that badly tarnished the trust of major global players.

“Desperate short term measures destroying future, as the IT industry which was growing at over 30% now with zero growth. Stop this nightmare now,” he added.

Talking about Azam Swati arrest, Asad Umar said that there was a clear decision of the Supreme Court that there cannot be lodged more than one FIR for a single charge. So, he said under which law more than a dozen FIRs have been registered against Azam Swati?

“How long will the Supreme Court watch the human rights violation as a silent spectator,” he questioned.

“Who did what, why, for whom, all will be revealed now,” he concluded.