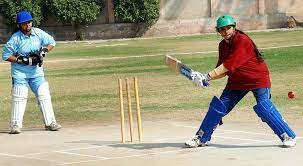 In the final match, the Mardan team won the toss and decided to field first, which did not prove useful for Mardan, and the Peshawar team scored 128 runs for the loss of three wickets in the allotted 12 overs. Hina was the star of the day who smashed 65 runs including nine boundaries and two sixes.

In reply, the team of Mardan region could score only 69 in the allotted overs, the final match was won by Peshawar region by 59 runs. Hina was declared the player of the match by playing a brilliant score of 65 runs not out.

Speaking on this occasion Madiha Nisar lauded Directorate General Sports Khyber Pakhtunkhwa for organizing different sports events for female players. She said the government deserves praise for organizing women’s games along with men’s competitions and providing a platform to the women to showcase talent.

“If women can reach the National Assembly and the Provincial Assembly, then women can play its role in every sector in a good way. A heavy responsibility is imposed on women because the world has become a global village and women could play their due role in making Pakistan a prosperous nation because they are half of the country’s population.

She said when young women and men come forward side by side and fulfill their responsibilities effectively they would make Pakistan a leading country in the world. On this occasion, Vice Chancellor Shaheed Benazir Bhutto Women University Peshawar Professor Dr. Safia Ahmed welcomed the guests. She said that the administration of Shaheed Benazir Bhutto Women University will always play its role in the promotion of women sports and assured that sports activities will continue because the importance of sports activities for women cannot be ignored.