Life and Times of Rishi Sunak

Rough times ahead for the UK’s first Asian-origin PM 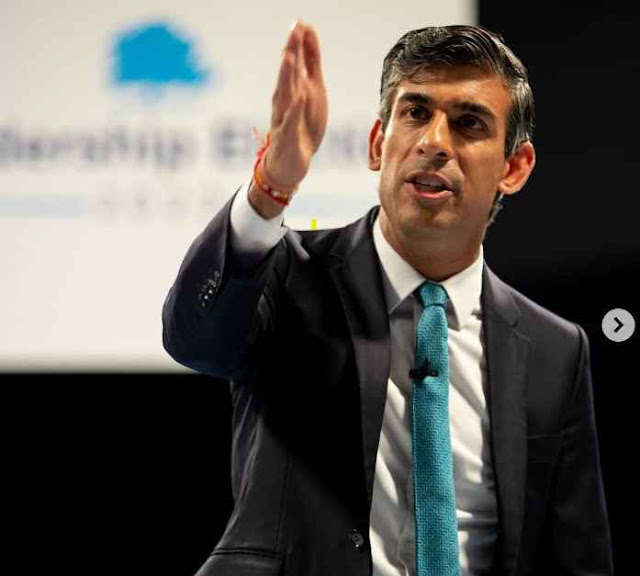 Following the resignation of Liz Truss amid the crisis in UK government, on 25 October 2022, Rishi Sunak, a British politician, who remained Chancellor of the Exchequer in the government of Boris Johnson from 2020 to 2022, was elected unopposed to succeed to the chair of British Prime Minister when he accepted the invitation of King Charles III to form the new administration in the country.

Earlier to this event Sunak was finally left the sole candidate in the race for the leader of Conservative Party of the country due to the declining by former PM Boris Johnson to become a candidate and the withdrawal of Penny Mordaunt on October 24, the day Sunak was declared leader of the Party.

It’s a time for Asians in general, and Indians in particular, to rejoice, as he is the first British Asian to assume this prestigious office and also the first non-white and Hindu individual, having strong faith in Indian culture and civilization, to become the Prime Minister of United Kingdom.

He is the richest British prime minister, with a net wealth of £730 million, since the 14th Earl of Derby, who served the country three times as prime minister between 1830 and 1852, and also the youngest prime minister since William Pitt the Younger, British prime minister, who was just 22 when he first became Prime Minister in1782. With so many feathers and qualities, now he is the most important politician of the country who will control the government through cabinet becoming chairman of the cabinet and a member of the Privy Council. By centuries long tradition of the United Kingdom, he is not the head of the state but head of the government chosen by the monarch and the party as well.

The present British Prime Minister Rishi Sunak was born on 12 May 1980 at Southampton’s general hospital to Indian parents Yashvir and Usha Sunak who were born in Kenya and Tanzania respectively. His father was a general practitioner while mother ran a local pharmacy. His India connection is very strong because his grandfathers were born in Punjab, British India, and migrated to the United Kingdom in the 1960s from East Africa. Initially, he was educated at Winchester College but went to Lincoln College, Oxford, and later to Stanford University as a Fulbright Scholar.

After his graduation, he took an internship with Goldman Sachs, primarily an investment bank and worked there from 2001to 2004 as an analyst. At the time he left the job to join The Children’s Investment Fund Management (TCI) and became a partner in the company in September 2006 and moved to another fund firm Theleme Partners in 2009 and served as a director of investment firm Catamaran Venture, owned by his father-in-law with whose daughter Akshata Murthy, a fashion designer, he was married in the year 2009. His father-in-law, N. R. Narayan Murthy and mother-in law Sudha Murthy were an Indian billionaire business icon and held many houses and properties in several parts of England itself.

All these things taken together have brought the country’s economic future to the verge of decline for a long time to come. It has created a social as well as environmental challenge where developing a coherent/forward-looking policy has become difficult and a fear of industrial and technological recession is looming large. At the juncture, policy makers need a clear-cut plan to tackle the disruption by adopting a three-prong policy 1. Kickstarting and sustaining a return to growth and prosperity, 2. Levelling up productivity, income and opportunity, and 3. Addressing the challenges of net zero carbon emissions by 2050 by establishing a clean industry. In other words, a new vision is the need of the hour to handle the whole situation.

His political career began in October 2014 when he was selected as a Conservative candidate for Richmond (Yorkshire) and defeated Wendy Morton, As the seat was one of the safest seats of the party and had been held by the party for the last hundred years, he was sure about the victory.

In the same year he was made head of the Black and Minority Ethnic (BME), a research unit of a centre-right think tank and also prepared a report in co-writing on BME communities in the UK. A year later in 2015, he was elected a Member of Parliament (MP), for the constituency in the general elections with a majority of 19,550 and served as a member of the Environment, Food and Rural Affairs Select Committee between 2015-2017. On major issues like UK’s leaving or remaining in the Brexit, a European Union in June 2016, Sunak supported England’s exit from the organization but at the same time also suggested to establish free ports and advocated the creation of a retail bond market for small and medium-sized enterprises by writing a report in the same year. His political fortune moved further and he was re-elected in 2017 general election for the second term with an increased vote of 23,108 and served as parliamentary under-secretary of state for local government from January 2018 to July 2019.

In the same year Rishi Sunak supported Boris Johnson as Conservative Party candidate for its leadership and also wrote an article with others in The Times to advocate the campaign in Johnson’s favour. Boris Johnson appointed Sunak as chief secretary to the Treasury on July 24,2019 to serve under chancellor Sajid Javid and he became a member of the Privy Council, the very next day. After re-election in the 2019 general election with an increased vote of 27, 210 he represented the Conservative Party in a seven-way election debate organized by both the BBC and Television.

Now, with the continued jump in Rishi Sunak’s political career many began to view him as a rising star of British politics as he was again promoted  Chancellor of the Exchequer on 13 February and remained on the post till July 2022 when he resigned from the post to stand up as a candidate for the party’s leadership election to replace Boris Johnson but lost the members’ vote to Liz Truss, who resigned in October 2022 and paved the way for Sunak to become the Prime Minister of the country unopposed on 25 October 2022.

However, the timing of Rishi Sunak’s premiership of the United Kingdom is more an occasion of challenge than of rejoicing as the country is facing an unprecedented set of economic shocks and waves combined, which are capable of threatening the basis of UK’s daily life and prosperity on a large scale in the whole nation. The impacts of covid-19 and Brexit are becoming heavy and proving costly in spheres of the job-creating and export-earning sectors of the economy. In addition, the old-model businesses require technological change in unpredictable ways, resulting in low productivity growth and regional inequality.

All these things taken together have brought the country’s economic future to the verge of decline for a long time to come. It has created a social as well as environmental challenge where developing a coherent/forward-looking policy has become difficult and a fear of industrial and technological recession is looming large. At the juncture, policy makers need a clear-cut plan to tackle the disruption by adopting a three-prong policy 1. Kickstarting and sustaining a return to growth and prosperity, 2. Levelling up productivity, income and opportunity, and 3. Addressing the challenges of net zero carbon emissions by 2050 by establishing a clean industry. In other words, a new vision is the need of the hour to handle the whole situation.