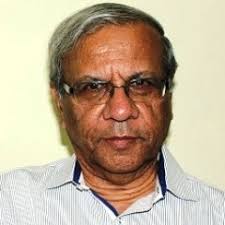 KARACHI: One of the major reasons for the flood situation that occurred in the country after the record-breaking rainfall was that the past and the present government did not seriously work on the infrastructures and requirements of the masses but used their recourses to entertain their favorite-ones, claimed the seasoned economist and former provincial Advisor Dr Kaiser Bengali here Monday while addressing a seminar on “climate change effects on water scarcity and food insecurity in Sindh and Balochistan: a way forward”, which was organized by the department of economics University of Karachi at the Arts Auditorium.

The water pipeline project which was supposed to provide water supply for the metropolitan was deliberately shifted to Bahira Town Karachi (BTK) and now, the Malir Expressway is being built to ease the way to BTK, he added.

If developments are being carried out on motives to facilitate the favorites than this country will never progress in the right direction. The governments are busy making everything possible for their blue-eyed people or organizations and on the other hand people are suffering from natural disasters.

He claimed that it was our tragedy that representatives of foreign institutions had been imported from other countries to run the country. He said that after 2000, we witnessed people coming from IMF, WB, and ADB to run the affairs of the country and after 1993, three governors of the State Bank came for 16 years, all of them were representatives of foreign institutions, but we did not raise any voice against it, the consequences of which we are suffering till today.

He further said that the state of our economic policies is that we have reduced import duties and increased domestic taxes, the import duty on raw materials should be low and the finished product should be high so that the raw materials can be manufactured in the factories and employment opportunities will be available.

But this is not the case, we have no duty on books here because of the UNESCO protocol but there is a very high duty on the import of paper.

Kaiser Bengali shared that industries in Pakistan are being deliberately ignored and when you don’t have industries you will not have employment opportunities. One of the biggest problems is that we don’t raise our voices for our rights, we don’t protest, and we have to raise our voices for our rights.
Meanwhile, the KU VC Professor Dr Khalid Mahmood Iraqi said that more than 33 million people have been affected by the recent devastating floods and around eight million people have been displaced.

He shared that around 67 percent of the area of Sindh and Balochistan has been affected and about eight million hectares of the cropped area have been completely wiped off along with road and railway networks. The overall losses are more than US$3 billion.

The Vice Chancellor KU Professor Dr Khalid Iraqi mentioned that newly evolved climate stress has created financial implications, new risks, and uncertainties for companies, governments, financial institutions, and individuals. The question arises as to what steps can be taken to best manage the outcomes of the calamities on an immediate basis.

Another speaker, DG Pakistan Agriculture Research Council South Region Dr Zakir Hussain Dehri said that although Pakistan contributes 0.9 percent to global greenhouse gas emissions, it is among the 10 most affected countries and is highly vulnerable to climate change because Pakistan is an agricultural country and the impact of climate change on agriculture and natural resources are huge.

Meanwhile, the Founder CEO of Clifton Urban Forest Masood Lohar said that we should try to improve the ecosystem by planting native plants. He mentioned that about 10 percent of Pakistan’s population lives in Karachi which is the economic hub of Pakistan, but the infrastructure of the mega city is not in good condition.

He stressed that our young generation should educate people about climate change and take steps to avoid its effects. The Dean of Architect and Planning NED University Professor Dr Noman Ahmed said that the recent flood is more destructive than we had witnessed in 2010, and we have to improve drainage and infrastructure to avoid future flood disasters in the country.

According to him, the lack of local government structure in the country is also contributing to our problems. He mentioned that the presence of a proper local government could have helped a lot in averting these catastrophes.