Yoon’s peace overture to the North 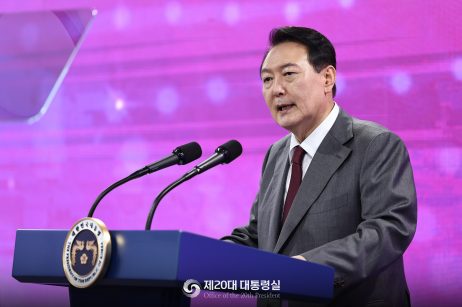 In his National Liberation Day address on August, 15, 2022, South Korean President Yoon Suk-yeol unveiled his government’s ambitious plan to help the North Korean government transform on the path of peace and development and shun its course of 3Ds i.e. death, destruction and despair.

Yoon announced his plan to adhere to the so-called “3Ds,” i.e. nuclear threat “deterrence” “dissuasion” of nuclear development through sanctions and pressure, and “dialogue” and diplomacy, thereby creating a strategic environment that leaves Pyongyang no choice but to return to denuclearization talks.

Considering Pyongyang’s hard-line stance against the ROK and its rejection of engaging in denuclearization talks, the ROK government plans, Yoon unveiled his plan for North Korea its ambitious plan and called it as “Audacious Initiative” for a Denuclearized, Peaceful and Prosperous Korean Peninsula.

Under the Audacious Initiative, the Republic of Korea (ROK) is ready to play a central role as a direct and key stakeholder of issues pertaining to the Korean Peninsula and to build a foundation for peaceful and prosperous unified Korea through principled and consistent negotiations for complete denuclearization of North Korea.

If North Korea returns to the negotiation table with a genuine intent, the ROK government will first come up with an agreement on the entire denuclearization process including an initial set of bold actions together with a definition and end state of denuclearization, as well as phased denuclearization and corresponding measures, and implement the agreement in a phased manner.

If a comprehensive agreement on the overall roadmap of the denuclearisation process is reached, Yoon’s government will establish the “Inter-Korean Joint Economic Development Committee” to commit itself to Inter-Korean Economic Cooperation in tandem with phased denuclearization measures.

Yoon’s plan will include conspicuous improvements in North Korea’s economy and people’s livelihood corresponding to Pyongyang’s denuclearization status. And implementation stages shall be minimized to two steps, from substantive to complete denuclearization, in an effort to accelerate the process.

Starting from the “substantive denuclearisation” stage, South Korea (ROK) will prioritise three major areas such as building infrastructure, improving people’s livelihoods and developing the economy with the following five projects.

As it becomes necessary to implement measures like sanctions exemption during the transformation process, ROK will closely coordinate with the international community and its position of “maintaining sanctions regime until North Korea’s complete denuclearization” stands unchanged.

Furthermore, political and military corresponding measures, e.g., diplomatic support for normalization of U.S.-DPRK relations and discussions on disarmament of conventional weapon systems will run parallel with the process.

Though it is not the first peace and development offer being made by South Korean nation to its brethren living in the North, this is perhaps the first document which has almost a detailed plan backed by the government’s commitment to enforce it. Since Yoon has been elected recently, he has a full term to implement the plan and has time and resources on his side.

However, the North Korea’s belligerent and flat rejection of the Audacious Initiative is another evidence that the ruling elites of the nuclear power want to keep the people of North Korea underdeveloped, hungry and poor. In a bid to prolong the reign of fear in North Korea, Kim Jong-un would never allow development and prosperity enter North Korea.

It is now up to world community as well as the people of North Korea to see the difference between the leaders of North and South Korea. While Kim Jong-un wants to keep his peoples in the dark, he cannot hold the sun from rising for long.