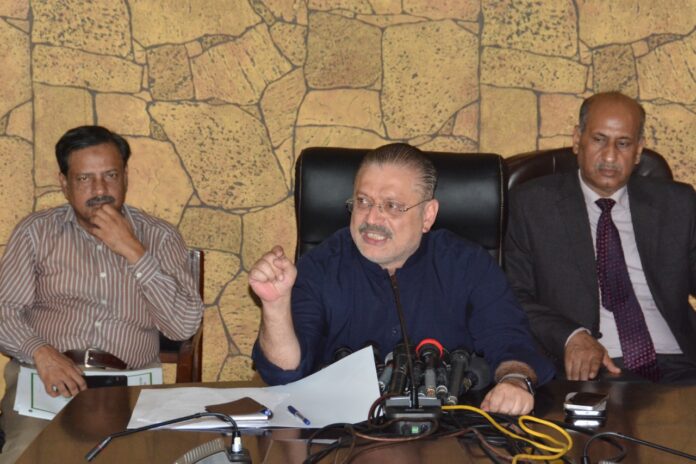 KARACHI: Sindh Information Minister Sharjeel Inam Memon said the provincial government has so far distributed 163,416 tents and 356,668 ration bags to the people hit by floods, adding the representatives were working assiduously for the rescue and relief of the victims.

Addressing a news conference, he said that work on draining the floodwater would start after the water level dropped in rivers, adding that ration distribution would be carried out in the entire province at the Union Council level.

“The price of 40kg wheat has been set at Rs4,000. The entire nation is united in the current situation,” he pointed out.

“A fake picture of selling relief goods is circulating on social media. What message are some elements sending to the world with such actions?” he censured.

“Tell me what is the fault of the flood victims that such campaigns are being run? The PTI should tell what type of politics is this?” he added.

“I appeal to the interior minister to take action against those who were involved in this campaign,” Sharjeel Memon demanded.

“One ‘person’ had a tussle with the establishment. A heinous conspiracy was hatched against the flood-affected innocent children. [Only because] you are not in power, you are telling the world not to help the flood victims,” he directed his criticism at former premier Imran Khan.

“I will file a petition in the Sindh High Court (SHC) too. A hideous conspiracy was hatched to stop the relief of the flood victims,” he abhorred.

“Whatever Shahbaz Gill said on television, its strings were handled from Bani Gala. They have turned their supporters crazy through a narrative of American slavery,” he added.