A house on fire

The climate crisis threatens everything 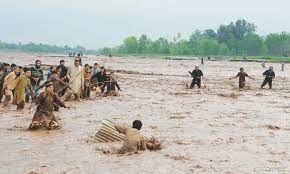 “I don’t want you to be hopeful. I want you to panic. I want you to act like your house is on fire, because it is.” Greta Thunberg worded this statement in its truest sense for the world is facing the climate change crisis which is an existential threat. But this crisis has become worse for the developing world as it stands fighting economic recession, sociopolitical deterioration and many other non-traditional security threats. Pakistan faces the climate crisis as an existential threat at the same time it faces many other problems. It has become hard to comprehend what is more devastating for Pakistan at the point. The ravaging political environment or the natural environment itself, as it seems Pakistan is merely a click away from spiraling into complete destruction?

Despite the fact that in historical terms, Pakistan has stayed one of those countries which contributed minimally to global greenhouse gas emissions, for the last two decades, it has been suffering from a worsening climate change situation at home. The floods in 2010-2011 caused destruction on an unprecedented scale and it took years to rehabilitate the affected areas. Since then, climate change events like urban heat-waves, glacier meltdowns, glacial lake outburst floods, atypical thunderstorms, flash floods and so on, have been occurring more than usual. Currently, as of this moment, Pakistan is facing floods across the country at an unprecedented scale yet again.

This year’s monsoon rains have caused havoc across the country. There have been eight spells of monsoon already and as per the reports of the Meteorological Department a ninth spell is expected to enter the country around mid-September and heavy rainfall is expected in the north-west and south-east areas across all four provinces. At a time when floods are in process of ruining everything coming in their path, a new spell of heavy rains across the country may prove to be fatal.

The big question here is what brought us to this critical point? The answer is simple. Like everything else in our governance matters, climate change crisis management has been neglected for the last two decades. Although Pakistan adopted its first comprehensive National Climate Change Policy in 2012, it has seen zero to no progress in its implementation. Many reviews were undertaken in this policy in later years along with supplementary national policies on hazardous substances, forestation, sanitation and electric vehicles etc. However, owing to the continuous political instability and change of governments, a thorough implementation of climate related policies in the country has been a far-fetched dream. Successive governments have neglected the fact that Pakistan has been on the red list of climate change-related crises despite been warned by International agencies and the United Nations Environment Program (UNEP). Governance has been an issue with the country since its inception 75 years ago. Nevertheless, today, poor governance coupled with a debilitating economy and extreme political instability has manifested the hugely vulnerable position of Pakistan.

Another issue with climate change mitigation and adaptation is the 18th Amendment and lack of interprovincial coordination and cooperation, and federal-provincial ties. As a result, many climate-related reforms, development projects and management related policies have faced a dead end. In addition to that, climate-related policies have deeply been politicized in the country and thus an acute political polarization has taken away the good of that. Nationalistic politics has been played on issues of new dams, forestation, new irrigation systems, and administrative devolution, among other things.

The first and foremost goal must be of political stability. This is necessary to create a national consensus on climate change and bring about necessary economic rehabilitative policies to steer the country into economic growth.

Furthermore, the Meteorological Department, disaster management authorities and related ministries are not only ill-equipped, lack capacity but are entirely corrupt. The results we see today are nothing but destruction and ruination across the country. As per latest satellite imagery, approx.. 55000 sq km of the country is inundated, 33 million people are internally displaced and rehabilitation costs standing at $10 billion. The proverbial, “A stitch in time saves nine” happens to be the truest for Pakistan today. But at the same time, it is never too late, and also remains there for the country. In order to evade future climate related disasters, which are to come one after another, the country needs to revisit its priorities at all levels.

A few of the policy steps that can be undertaken are the following: Reconstitution of Indus River System Authority (IRSA), a comprehensive reestablishment of Ministry of Climate Change at federal level and establishment of its sister ministries at provincial level, devolution of Disaster management authorities to district level. Moreover, Pakistan at the moment, is in utmost need of new administrative units to tackle governance and political issues in all aspects.

As for structural reforms, the following steps should immediately be taken: New water reservoirs to tackle flood waters in case of heavy rains and to harvest rainwater for use in case of drought, a new cross channel water irrigation system in lower Indus delta situated at the confluence of south Punjab, northern Sindh and northeast Balochistan, a new national climate information-tuned satellite, eradication of fossil fuels, comprehensive hybrid and electric vehicles induction, rehabilitation of urban sewers, new master-plans of metropolitan areas, and river head-works in northern areas.

In addition to that, climate justice should be incorporated into the constitution through parliamentary legislation so that the rights of people are secured as well as the protection of lives and properties are ensured.

To achieve these objectives, the first and foremost goal must be of political stability. This is necessary to create a national consensus on climate change and bring about necessary economic rehabilitative policies to steer the country into economic growth. Currently, Pakistan seems to be a house on fire and it needs immediate actions to put that fire off before every drop of water runs out.

Dr Umair Ashraf
The writer is a freelance columnist