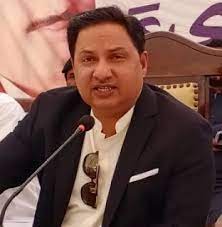 The minister said in a statement issued here that tent cities have been established in the most affected areas.

He said that spray was being carried out to prevent people from malaria and other waterborne diseases. Flood affected families were also being provided with two meals according to health principles.

Jam Ikramullah Dharejo said, funds have been provided to all the Deputy Commissioners for the rehabilitation of the flood victims. Pak Army, Navy and Police personnel were also helping the flood affected families in every possible way, he added.

He said that Sindh cabinet members were also present in the field and the provincial government would not sit until the rehabilitation of last flood victim.

Dharejo said that it was the time for service and not the politics. Tehreek-e-Insaf members were holding public gatherings and Imran Khan was spending millions of rupees on music concerts at a time when people were facing devastating floods.

He asked Imran Khan to do the politics later and serve people now.

He demanded the philanthropists and welfare organizations to come forward and help the flood victims.

ISLAMABAD: The Islamabad High Court (IHC) on Wednesday adjourned till December 16, hearing of appeals by accused against their conviction in Axact fake degree...
Read more
NATIONAL

December 8, 2022
MONTREAL: Protests, public debates and film screenings: this is the other side of the COP15 summit, where NGOs are mobilising to raise awareness of...