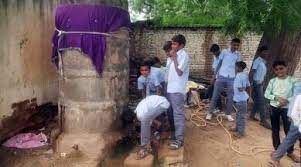 A nine-year-old Dalit student, who had suffered injuries on his eye and ear after his teacher thrashed him for drinking water from a pot meant for so-called upper caste Hindus at a private school in Rajasthan’s Jalore district, died in a Gujarat hospital where he was
taken for treatment.

Reports said, police have arrested the teacher and charged him with murder and under the strict law that protects India’s scheduled castes and tribes.

The FIR registered in the case says Dalit student Indra Kumar Meghwal was “naive and did not know that the pot had been kept aside for the teacher from the upper caste”. “Teacher Chail Singh told the boy, ‘You are from a lower caste. How dare you drink water from my pot!’. He then thrashed him,” it says.

“Indra was a child, he didn’t know that the matki (earthen pot) that he drank from had been kept separately for the savarna jaati (upper caste) teacher. Indra mistakenly drank water from the matki of Chail Singh,” reads the FIR registered in the case under Section 302 (murder) of the IPC and relevant sections of the Scheduled Caste and Scheduled Tribe (Prevention of Atrocities) Act.

The FIR adds that after Indra drank the water, the teacher abused him with casteist slurs and beat him up. It says that as a result of the beating, the child sustained internal injuries to his right ear and eye.

As per a report published in Indian media, for 24 days, the family of a nine-year-old Dalit boy from Rajasthan’s Jalore district took him from one hospital to another before the child breathed his last at the Ahmedabad Civil Hospital.

The family members of the Dalit child victim also claim that after the incident, they were asked by the Rajputs of their village – the community to which teacher Singh belongs – to arrive at a compromise and not go to the police.