CPC huddle for progress while maintaining stability in economic work 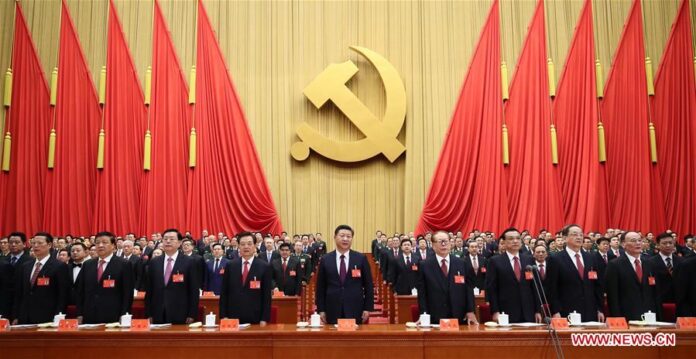 BEIJING: The Political Bureau of the Communist Party of China (CPC) Central Committee stressed the importance of adhering to the general principle of seeking progress while maintaining stability when planning the economic work in the second half of the year during a meeting on Thursday.

In the face of the complex and volatile international situation and arduous domestic issues related to advancing reform, development and stability, achievements have been made in epidemic prevention and control, as well as in economic and social development, according to the statement from the meeting.

Accelerating the building of a new development pattern, promoting high-quality development, and effectively coordinating epidemic prevention and control with economic and social development were highlighted at the meeting to ensure sound economic work for the second half of 2022.

To this end, putting people’s lives first, preventing cases from overseas and internal rebounds, and sticking to a dynamic zero-COVID approach were also stressed during the meeting.

Efforts should be made to track viral mutations and develop new vaccines and drugs, the statement said.

Noting that macroeconomic policy should focus on expanding demand, it said the stability of industrial and supply chains and international competitiveness should be further improved.

Ensuring security was another key point; strengthening food security, improving the country’s ability to ensure energy supply and stepping up efforts to develop new energy systems were also highlighted in the meeting.

Advancing reform and opening-up to add impetus to economic development, enhancing the capacity to ensure people’s well-being, and creating a good environment for entrepreneurs were also discussed.

Separately, Xi Jinping, general secretary of the Communist Party of China (CPC) Central Committee, on Monday, presided over and addressed a symposium for soliciting opinions and suggestions on the current economic situation and economic work in the second half of the year from non-CPC personages.

China’s economy is resilient, has great potential and is full of vitality and the fundamentals of the Chinese economy will remain sound in the long run, Xi said.

Heads of the central committees of eight non-Communist parties and the All-China Federation of Industry and Commerce, as well as a representative of personages without party affiliations, made their respective speeches, agreeing with the CPC Central Committee’s analysis of the current economic situation and considerations for economic work in the second half.

After hearing their suggestions, Xi fully affirmed the economic achievements made in the first half of the year and stressed effectively coordinating epidemic prevention and control with economic and social development.

He underlined upholding the principle of pursuing progress while ensuring stability, the full, accurate and comprehensive implementation of the new development philosophy, deepening the supply-side structural reform, accelerating the building of a new development paradigm, and advancing China’s high-quality development.

Xi said he hoped all non-CPC personages would view the current economic situation in the correct light, focus on major tasks in economic and social development, and create a good environment for the 20th CPC National Congress.