Ravages of the diplomatic cipher

How the cable affected he bye-election 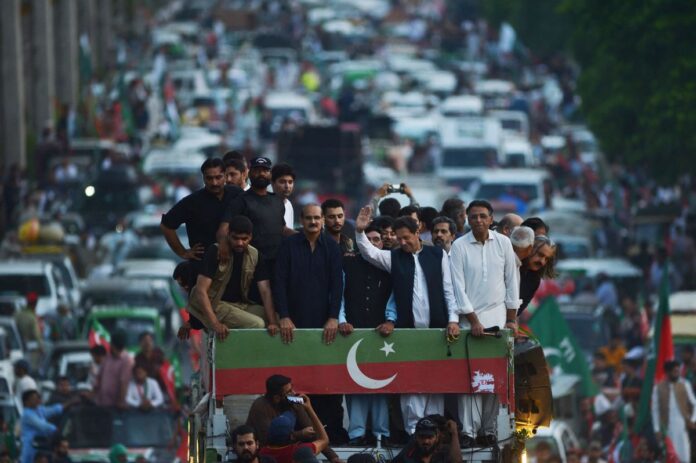 Politics in Pakistan is an interesting case study of the way a politician can pump the hot air of sentiment into the otherwise dying balloon of a party’s popularity.

While the date of 10 April 2022 was approaching, the PTI constructed a self-serving excuse in a diplomatic cable sent by Pakistan’s ambassador serving in Washington, the USA. The PTI portrayed the cable as a ploy to change its government. Ironically, a routine diplomatic cable was renamed a letter and then it was accentuated as a threatening letter (protected otherwise under the Official Secrets Act of 1928). Not indigenous faults but the imminent fall was projected as a foreign conspiracy meant for toppling the PTI’s government. Nevertheless, the PTI’s effort to forestall its exclusion through the vote of no-confidence foundered on the touchstone of constitutionalism.

The first effect is that other political parties may also resort to the same practice. That is, they may also fuel and exploit anti-US sentiment to swing voters in their favour. Second, with the biological age of the youth, anti-US sentiment is bound to travel a long distance down the line of history. Rage respects no reason. Any anti-US sentiment can turn into a fury impairing Pak-US relations

After April 10, when the Pakistan Democratic Movement replaced the PTI democratically, the latter was in a state of political free fall till July 17. On the fateful day, bye-elections for 20 seats of the Punjab Assembly saw the win of 15 PTI candidates. The importance of the win was to change the government in the province replacing Hamza Shahbaz Sharif of the ruling PML(N) with Ch Pervez Ilahi, supported by the PTI.

The PTI exploited the diplomatic cable at two junctures: first, to stave off the no-confidence motion, and second, to woo voters in the bye-elections. The first attempt met a failure but the second attempt became fruitful. The first attempt miscarried because the National Security Committee trashed the cable and refused to accept the assertion that the cable had anything to do with a foreign conspiracy against the PTI government. The same was the response of the Supreme Court, as conveyed just before the bye-elections.

The second attempt, however, became successful because the idea was sold to the public. For the bye-elections, the electoral slogan aired (and printed on posters and flyers) was Aazadi ya Ghulami (freedom or servitude). That is, if you want freedom, vote for the PTI’s candidate. The idea was to exploit the public sentiment nurtured against some perceived foreign occupation. The diplomatic cable which was used as a source of face-saving became a saviour of the PTI’s repute.

A question is still unaddressed: If there were any such intimidating cable bordering on foreign intervention, why the PTI announced to dissolve assemblies and call fresh elections? One obvious answer is that the PTI government wanted to evade the tumble through the no-confidence motion, which invited ignominy for the party.

The PTI is a hodgepodge of various groups. One of them is the ex-party members of the Jamaat-i-Islami, a religio-political party which lost political relevance with the end of the regime of General Pervez Musharraf in 2007. The JI had supported General Musharraf in his effort to get his unconstitutional acts legalized through the 17th Constitutional Amendment passed in December 2003. The whole politics of the JI revolved around anti-US sentiment, especially during the Cold War.

After 2007, the JI’s members, whether expelled or not, remained in search of political relevance. In the PTI, they found a chance to salvage their personal political agendas. In this regard, Mian Mehmoodur Rasheed, Ejaz Ahmed Chaudhry, and Fayyazul Hassan Chohan are a few names to quote. In the recent bye-elections, in Lahore, the seat of PP-158 (constituency) was won by Mian Muhammad Akram Usman, the son of the late Mian Muhammad Usman, who was a staunch member of the JI and who had won multiple times as a Member of National Assembly on the JI’s ticket.

With that, one wonders what happened to the PTI’s popular slogan of condemning dynastic politics. That is, after opposing dynastic politics derisively, the PTI itself relied on the same. The bye-elections have shownd that not workers of the PTI, especially from the youth, represented the party to win the elections, but conventional politicians or political families won the elections mostly.

The next major group in the PTI is the youth, who are just enthused to play politics but who are too callow to grasp the dynamics of politics. The youth are mostly voters and not leaders. The youth think that they are exercising a sway over the will of traditional politicians. The youth are oblivious of the fact that they are easy fodder for those who craft rhetoric to abuse sentiments of the street.

Currently, the PTI is showing two main trends. First, the PTI is under the spell of anti-US populism, a throwback to the JI’s politics of the 1980s and early 1990s. Second, the PTI has eventually espoused the cause of dynastic politics.

Exploitation is not a formula new to the PTI. In the 2018 elections, supported by intelligence agencies, the PTI learnt to use the ethnic (South Punjab) and religious cards to propagate its voice. In the recent bye-elections, however, a new card of anti-US sentiment was used. The USA has been portrayed as a conspirator active in the change of the government in Pakistan. This is a dangerous proposition fraught with chances of adversely affecting Pak-US relations.

On July 16, even President Arif Alvi was found insinuating the US’s role in toppling the PTI’s government in Pakistan. He said so while addressing a group of Pakistani doctors working in the USA. The malpractice of accusing the USA of local ills is bound to have long-term effects, especially when the youth are involved.

The first effect is that other political parties may also resort to the same practice. That is, they may also fuel and exploit anti-US sentiment to swing voters in their favour. Second, with the biological age of the youth, anti-US sentiment is bound to travel a long distance down the line of history. Rage respects no reason. Any anti-US sentiment can turn into a fury impairing Pak-US relations.

A good strategy could be to seek the court’s permission to make public the diplomatic cable to let all Pakistanis know the truth. Otherwise, the anti-US sentiment is bound to escalate. Moreover, it would be a routine in the future to use such cables to serve one’s parochial purpose.