A province deprived of development despite its riches 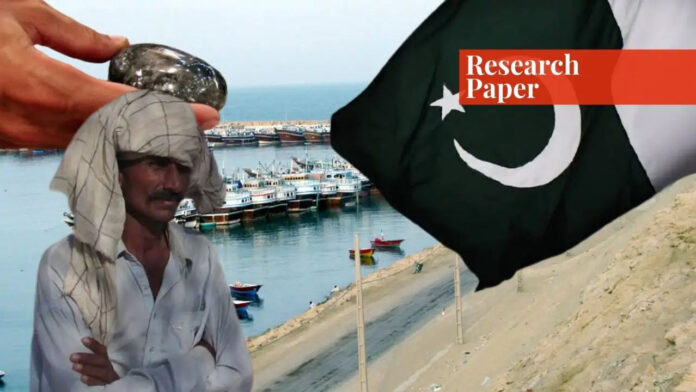 It is ironic that despite being home to abundant natural resources-such as coal, copper, gold- Balochistan is still far behind other provinces. A democratic state knits different sections of society with an unbreakable bond to stay united but Pakistan seems to lack such a bond. There is a growing disparity between the provinces regarding political stability, education, security, infrastructure, provincial and territorial human rights. Such a great glaring gap between provinces undermines the solidarity that a democratic country requires. With the mileage of being a geo-economically and geostrategically important province of Pakistan, Balochistan has been embattled with a rampant democracy and leadership crisis since its absorption in Pakistan in March 1948.

To establish lasting peace in Balochistan, needs a holistic strategy which shall move beyond rhetoric. An experienced and legitimate government at the centre and a truly representative setup for Balochistan is the panacea of all woes, unlike the one headed by artificial construct with political naivety. In the meanwhile, The aggrieved Baloch community leaders should be calmed and persuaded to take the democratic route to address the issues faced by their people to put an end to this contagious conundrum of hate, disgust and killings.

Convinced of being historically wronged, the inclusion of Balochistan in the country was not smooth and all Baloch stakeholders were not in favour. Due to the arbitrariness of the state policies, the Baloch have been resorting to extremism; by picking up arms against the state machinery as they first did in 1958 in a bid to reclaim identities and rights after being unheard and crushed through the military. They have lost many family members to unabated state violence since the inception of pAKistan. However, the Baloch view their fight as one against repression and for self-determination.

In addition, the deteriorating human rights scenario has further aggravated in Balochistan. The resurging woes of enforced disappearances and extrajudicial killings are fretting the people and adding insult to injury in the human rights crisis. Degrading and manhandling Baloch protesters will definitely add impetus to unprecedented events like the attacks in Karachi University, and on the Karachi Stock Exchange, and will have the effect of definitely marring peace and harmony in Balochistan itself.

History is witness that no one in the province has been given rights easily, without having had to take the channel of hunger strikes, or blocking roads for many days. Protests of teachers demanding hike in salaries, of students against administrative injustices, of families of Baloch missing persons, have always been met with brutal torture and manhandling in Balochistan. Kidnapping, threatening, torturing, jailing and killing activists is now a normal response to protesters who have genuine grievances. Moreover, the religious minority, the Shia community has also faced the heavy-handedness of the state.

Quality education is an indispensable element in the progress and prosperity of a nation. But, unfortunately, education has never attained the attention that it deserves. Education in Balochistan is in shambles because of the dearth of attention, poor infrastructure, absence of teachers, and lack of separate schools for girls. Political leaders are intentionally silent and don’t want to equalise education standards because it would end their perks and privileges.

The State has failed to provide free and compulsory education to all children of the age of five to 16 years in the war-torn province, even though this is a fundamental right enshrined in Article 25A of the Constitution of Pakistan. According to All Pakistan Labour Federation President Sultan Muhammad, over 15,000 underage children in Baluchistan were working at the construction sites, coalmines, garbage collection centres, and automobile workshops. They were either orphans or belonged to poor families, and were compelled to work to support their elders.

The right to life is an inalienable right of citizens enshrined in Article 9 of the Constitution which has been in peril since these citizens have become aware of such a privilege as fundamental rights. Pashtuns and Baloch has been victims of genocide and their alleged killers did not leave any trail behind. In a fateful incident on 8 August 2016, the legal fraternity in Balochistan was decimated, which is a painful memory.

With the passage of time, Balochistan is running short of democratic leaders because they are brutally killed for upholding and supporting democratic values. Shaheed Usman Kakar aka Usman Lala, a great anti-imperialist, was killed in cold blood inside his home in Quetta. He remained a vibrant voice of Baloch-Pashtun concerns since his arrival in politics.

In his untiring political struggle, he played a vital role in upholding the banner of democracy, federalism, supremacy of constitution and rights of the oppressed nations. Karima Baloch, living in exile, was very concerned with state atrocities towards the Baloch nation. She fought against the ruthless state machine and against a deeply segregated patriarchal system that leaves no role for women outside the home’s four walls. Her voice was allegedly silenced in Toronto, a city in Ontario, Canada.

Rain is a blessing of the Almighty, but the ill-preparedness of the province for the rains, was a blessing in disguise. Due to the unpreparedness of the Balochistan government, the latest bout of rains has killed 64 and injured 49, according to reports of the Provincial Disaster Management Authority. Women and children have been killed and hundreds left homeless in the province. Sad to say, the natural calamity that devastated Balochistan again side-lined on the mainstream media. Since calamity has maligning lives of people across Balochistan, one can conclude that nature &and the powerful mistreat the vulnerable all the same way. The panacea is to remedy one’s vulnerabilities; then nature and the powerful will bestow upon you their respect..

Political engineering by the state and unrestrained military Intervention in the province, lack of civilian supremacy, depoliticisation of youth and precluding them from entering and participating into political spheres are the major consequences of the systemic instability in Balochistan.

To establish lasting peace in Balochistan, needs a holistic strategy which shall move beyond rhetoric. An experienced and legitimate government at the centre and a truly representative setup for Balochistan is the panacea of all woes, unlike the one headed by artificial construct with political naivety. In the meanwhile, The aggrieved Baloch community leaders should be calmed and persuaded to take the democratic route to address the issues faced by their people to put an end to this contagious conundrum of hate, disgust and killings.

Sami Ullah Kakar
The writer is a freelance columnist

October 7, 2022
NEW DELHI: Muslim organisations in India have condemned a mob from a Dusshera procession in Karnataka that allegedly barged inside a madrassah and performed...