There is much potent 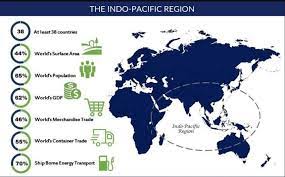 The Indo-Pacific region. which is also called the Indo-West-Pacific and Indo-Pacific Asia, is a part of the earth’s sea compial in the regionrising the tropical waters of the Indian Ocean and the central portion of Pacific Ocean.

In comparison to its surroundings, the part of Indo-Pacific is exceptionally rich in species which mainly attract the countries of the region and outside to have a fair influence in the area and motivate them to be benefited from the richness of the region al large. The famous term, ‘Indo-Pacific’, got prominence in the 1920s as a result of the multiple works on geography and geopolitics under the leadership of German geopolitician Karl Haushofer who pleaded strongly in favour of integration of above two oceans and make an anti-colonial force with the help of India, China and Germany against the maritime monopoly of Great Britain, the USA, and Western Europe.

On the whole it covers the area stretching from the west coast of the USA to the west coast of India and in addition touches the boundaries of 24 different countries with dissimilar socio-political set-ups and natures of government. Apart from geographical location and species richness, recently the region has become a hot cake due to increased Chinese interest as well activities in the area for more than a decade and the coming of the USA with its allies for the rescue of the people of the area. These all have made the region a global strategic spot of world politics.

It is undeniable that the People’s Republic of China has developed dramatically in all spheres since the 1990s and gradually became in a position to challenge the regional as well as global powers including the USA. Chinese expansionist policy in regard to its neighbours and in its surroundings, including Taiwan, made all of them security conscious on the one hand, while on the other keeping in view the strategic significance of the region the PRC increased its activities as a symbol of its capability, particularly in the South China Sea.

In the following years the whole Indo-Pacific region became an arena of regional and global competition as well as intense rivalry on a larger scale. Almost 15 years ago, in August 2007, the issue of the Indo-Pacific region was raised by Shinzo Abe, the then Prime Minister of Japan, in his speech to the Indian Parliament and he underlined its importance as the seas of freedom and prosperity in broader Asia.

In the speech he also referred to its security challenges and focused on sea lanes which link the two oceans. Years after from 2010-2011, the term came frequently in use of analysts in reference to strategic considerations and as a result, the Indian top leadership too became active making it a part of their strategy against  the PRC. Especially, in context of the Quadrilateral Security Dialogue, an informal group of nations which include four like-minded nations-Australia, Japan, India and the USA, in short, known as Quad,  Indo-Pacific rim or littoral states, members of Association of Southeast Asian Nations (ASEAN), China, and South Korea, the region gained enormous political, economic and strategic importance for the emerging Asian order in years to come. Two essential factors- the rise of China with low credentials and the decline of US powers and influence in the region have contributed to its emerging significance along with fear psychosis among the states of the area, particularly, Vietnam, the Philippines, and Japan.

The situation has deteriorated much in the recent three or four years on account of the trade war between Washington and Beijing during the presidency of Donald Trump. However, despite US differences with China on economic issues, other countries, India, Japan, Australia, and the USA, shared a common vision of a free and open Indo-Pacific which gives priority to infrastructure development in the larger interest of the region and the globe.

Although, the region became famous in ntworld politics due to the rise of China and decline of US power and influence in the area, it was envisioned primarily as an excellent centre of maritime trade and commerce on a large scale. It has a vast potential for prosperity for the countries of the region and beyond as it accounts for 65 percent of the world’s population, 63 percent of the world’s GDP and 46 percent of its merchandise trade. In addition, the concept of geopolitics has made its scope wider and  covers the nations and islands surrounding either the Indian Ocean or the Pacific Ocean along with Atlantic offshore islands, are also considered politically part of the Indo-Pacific region.

At the time of Weimar Germany or the pre-Nazi German Republic, the idea of economic zone was conceived and compared it with industrialisation of Europe at an early age. Now, with the direct involvement of the USA, it was hoped that the region would grow in a new form and content as emerged with the idea of Indo-Pacific Economic Corridor during the US-India Strategic Dialogue of 2013. The new idea and approach will be able to transform the economies of South and Southeast Asia into the Indo-Pacific economic corridor as a centre of development and investment with trade and transit.

Strategy apart to downsize the People’s Republic of China, most countries of the region including the USA have focused on its economic dimensions and laid emphasis on mutual co-operation in the larger interest of nations. In the context, on 23 May, US President Joe Biden has initiated a new scheme called the Indo-Pacific Economic Framework (IPEF) which includes a large number of nations such as, Australia, Brunei, India, Indonesia, Japan, Republic of Korea, Malaysia, New Zealand, the Philippines, Singapore, Thailand, and Vietnam. Together all countries represent about 40 percent of the world’s GDP. The main purpose of this programme is to create a resilient economy through better supply chains,  commitments to clean energy, de-carbonization and green infrastructure which will also help strengthen efforts to crack down on corruption, and for effective tax implementation and anti-bribery regimes. If not countries of the region, the USA and Japan, in particular, have kept strategic considerations side by side to minimize Chinese influence in the region and want a helping hand of others who don’t have the  capacity to face China directly.

As a result, the situation has deteriorated much in the recent three or four years on account of the trade war between Washington and Beijing during the presidency of Donald Trump. However, despite US differences with China on economic issues, other countries, India ,Japan, Australia, and the USA, shared a common vision of a free and open Indo-Pacific which gives priority to infrastructure development in the larger interest of the region and the globe.