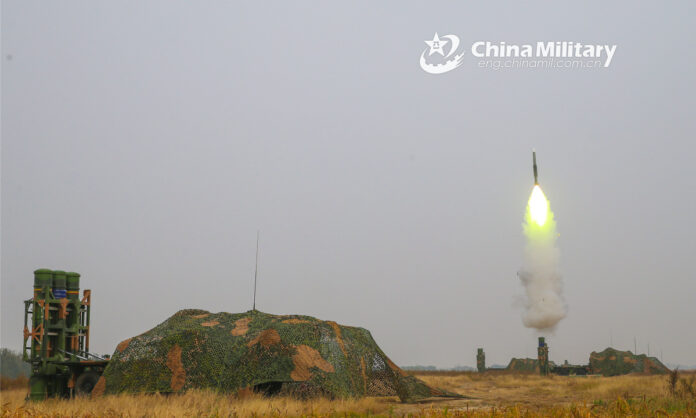 The test reached its desired objective, the press release said, noting that the test is defensive in nature and not aimed at any other country.

A similar test was held in February 2021, according to an announcement of the Chinese Defense Ministry at the time.

Intercepting an intercontinental ballistic missile during its mid-course is very challenging because during this phase, the missile, usually equipped with nuclear warheads, travels high outside of the atmosphere at very high velocity, experts said.

It is technically easy to intercept a ballistic missile in the boost phase because the missile is still close to the ground and accelerating, but it is difficult to get close to the launch site which is usually deep in hostile territory. In the terminal phase, the interception is also challenging because the speed of the diving missile is very high, analysts noted.

Countries are developing hypersonic missiles with wave-rider gliders that can adjust their trajectories mid-flight when they reenter the atmosphere, which makes terminal interception even more difficult, and mid-course interception has become even more important, analysts said.

A mid-course antiballistic missile system consists of two parts – a booster and an interceptor as its warhead, and moves to intercept the ballistic missile in the second phase of its flight where it is traveling outside the atmosphere, an expert familiar with the technology told the Global Times on the condition of anonymity.

One of the key challenges for a mid-course antiballistic missile system is the miniaturization of the warhead, making it light enough without compromising its flight precision as well as sensitivity, the expert said, adding that it is preferred to use a rapid combustion rocket as the booster for the system so that it can send the antiballistic missile to the atmosphere as fast as possible.

Although small in size, the mid-course antiballistic missile has a complete set of combat systems, including power, tracking, target-identifying systems and the killer part, the expert explained.

The mid-course antiballistic missile interception also has a network of support systems with an early warning and monitoring function. The centerpiece of the warning and monitoring systems is the missile early warning satellite, and support from long-range monitoring radars and a highly efficient and rapid command system are also playing crucial roles in the interception process, the expert said.

The latest test brings the number of publicly announced Chinese land-based ABM technical tests to six. According to media reports and official statements, other known ABM tests were carried out by China in 2010, 2013, 2014, 2018 and 2021. It was not revealed in which interception phase the test in 2014 was carried out, while all other five were carried out in the mid-course phase. All of those Chinese tests ended successfully.

By comparison, the US Ground-based Midcourse Defense system only has a success rate of just 55 percent, according to the Washington DC-based Center for Arms Control and Non-Proliferation.

For the next step, China needs to conduct tests under more complex scenarios to further hone its antiballistic missile capabilities, Wang said, noting that the US’ lower success rate does not necessarily mean China has surpassed the US, because the US tests might involve different and more challenging simulation parameters.

Despite China’s latest test does not target another country, analysts said that the US is the biggest source of ballistic missile threats to China.

The US Department of Defense is modernizing its intercontinental ballistic missile force with the $100 billion Ground Based Strategic Deterrent program in an attempt to deter China and Russia, US media outlet Defense News reported in April, when the US Air Force named its next-generation intercontinental ballistic missile the LGM-35A Sentinel, which is to succeed the 5-decade-old Minuteman III beginning 2029.

Having a reliable antiballistic missile system serves as a deterrent against US nuclear blackmail, experts said.

After withdrawing from the Intermediate-Range Nuclear Forces Treaty in 2019, the US began planning an anti-China missile network along the first island chain, media reported.

Jerusalem: Israeli lawmakers on Tuesday unanimously approved a bill to dissolve parliament, a key legislative step that pushes the country closer towards its...
Read more
World

US, Iran chief negotiators to start nuclear talks in Qatar

DOHA: Chief negotiators from the United States and Iran were due to start indirect talks in Qatar on Tuesday, bidding to remove obstacles...
Read more
World

BOGOTA: At least 49 inmates were killed and dozens more injured early Tuesday after a fire broke out during a prison riot in southwestern...
Read more
World

As two important forces in the world, China and the European Union (EU) should strengthen dialogue and communication and unswervingly uphold their partnership, said...
Read more
World

Muslims were being targeted on social media by backers of the ruling Bharatiya Janata Party and other Hindu nationalist groups in India, said a...
Read more
- Advertisment -