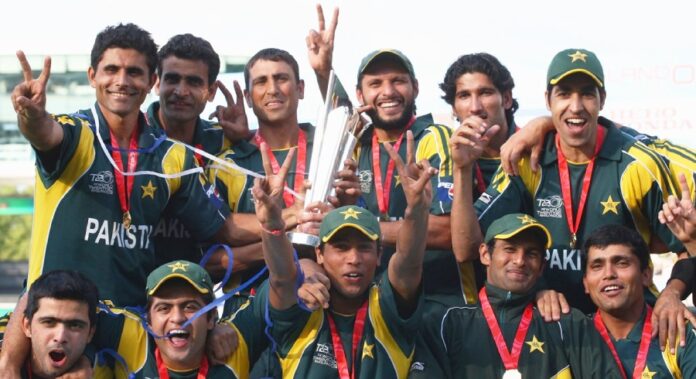 On this day, Pakistan dismantled Sri Lanka in the final and registered an 8-wicket victory, and lifted their first-ever ICC T20 World Cup trophy.

The Men in Green chased down the 139-run target in the 19th over as Shahid Afridi starred with an unbeaten 54-runs inning.

Boom Boom Afridi was named as player of the match for his superb innings as well as his contribution with the ball – the leg-spinner picked up 1-20 from his four overs.

Pakistan had a stable run throughout the tournament. However, the Men in Green were beaten by Sri Lanka early in the competition by 19 runs in the 15th match.

The only other defeat Pakistan faced apart from that was against England in their opening match, where England registered a comprehensive victory by 48 runs.

Pakistan beat Netherlands, New Zealand, and Ireland before facing a tough South Africa’s side in the semi-finals.

53 for 1 – Sri Lanka’s average score in the Powerplay overs, before this match. Here, they were reduced to 34 for 4 after six.

129 – The number of runs Shahid Afridi has scored in his last three innings, since moving up to No.3, at a strike rate of 148.27. This run also includes his first two half-centuries in Twenty20 internationals, in successive games.

3 for 20 – Abdul Razzaq’s bowling figures, his best in Twenty20 internationals, and his second three-wicket haul in six matches.