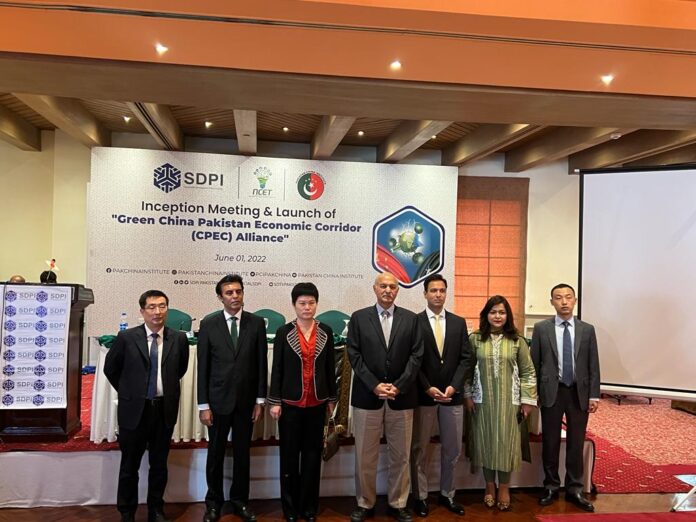 The goal of the establishment of the Green CPEC Alliance with members from both countries’ governments, investors, as well as civil society and environmental experts, is to support, accelerate and promote this transition within Pakistan and the Belt and Road Initiative (BRI).

Chairman Pakistan-China Institute Senator Mushahid Hussain Sayed, in his welcome remarks, expressed great pleasure in being part of the inception and thanked the presence of all esteemed guests.

During his speech, he felt it integral to press upon the urgency of the climate change situation in the world by arguing to prioritize the need for a green Pakistan, including redefining the notion of national security from a military-centric approach to Human Security, cantering on climate change, population planning, food security and water scarcity.

The CTG is committed to expanding its new energy business globally as part of the BRI plan and has established four international business lines: investment, construction, operation, and consultancy.

The CTG is also playing an important role in the implementation of the China-Pakistan Economic Corridor (CPEC), which is a bilateral agreement between the Chinese and Pakistani governments for regional connectivity and infrastructure development.

Muhammad Aurangzeb, CEO of Habib Bank Limited (HBL) appreciated the uniqueness of the initiative launched by the Pakistan-China Institute and Sustainable Development Policy Institute. He said that HBL is closely linked with CPEC projects in their financing as well as structuring.

In her closing remarks, Senator Seemin Ezdi, Chairperson of the Senate Committee on Climate Change said that Pakistan contributes less than one percent to climate change but is the 8th most affected country in the world. It is the need of the hour, she maintained, to plan for the future since it is the issue that affects the whole of humanity, not only the countries responsible for it.