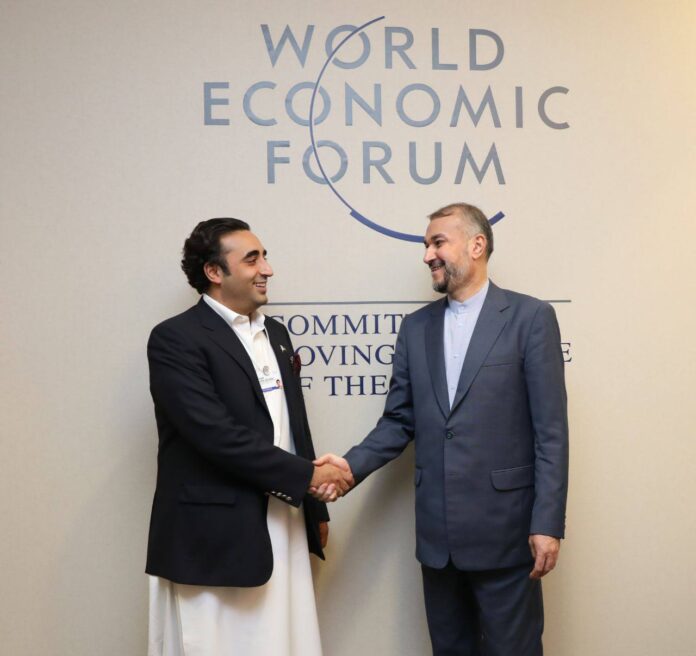 Talking to his Iranian counterpart Hossein Amir-Abdollahian on the sidelines of the World Economic Forum in Davos, the foreign minister emphasised that there exists vast scope in bilateral trade and economic cooperation which should be tapped by both sides through various institutional mechanisms and innovative ways to identify new sectors.

The foreign minister underscored the importance of earliest completion of border markets to improve livelihood in the border region.

He appreciated Iran’s steadfast support for the Kashmir cause, especially at the Supreme Leader level.

The foreign minister also thanked Abdollahian for sending an Iranian aircraft to Pakistan which helped extinguish the forest fire in Balochistan.

In the context of the situation in Afghanistan, Blawal noted that as neighbours, Pakistan and Iran have been closely coordinating. He underlined that sustained engagement between the international community and the Interim Afghan government is critical to advance shared objectives of peace and stability in Afghanistan.

Foreign Minister Amir Abdollahian extended an invitation to the foreign minister to understate a visit to Iran.

PESHAWAR: The Auditor General of Pakistan (AGP) has said that records of Rs1.41 is missing from accounts of the Provincial Disaster Management Authority (PDMA). The...
Read more
NATIONAL

August 8, 2022
ISLAMABAD: Ambassador-at-Large on Investment Zeeshaan Shah visited Silicon Valley of the USA and showcased the vibrant economic opportunities Pakistan’s IT market offered for the...