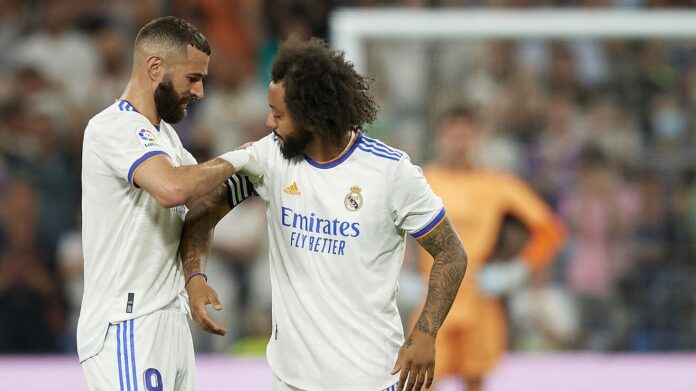 MADRID: Real Madrid’s last game before the Champions League final against Liverpool ended in a goalless draw against Real Betis on Friday as Marcelo bid farewell to the Santiago Bernabeu.

Carlo Ancelotti picked a strong side for Madrid’s last La Liga game of the season but with the title long sewn-up and the final in Paris just around the corner, neither team were keen to over-exert.

Instead, the contest was notable for the tribute paid to Marcelo and the lack of one for Gareth Bale.

Both players are expected to leave when their contracts expire this summer but only Marcelo was involved here, with Bale absent again from the squad.

Marcelo came on in the second half to a standing ovation and was given the captain’s armband by Karim Benzema, who played the whole 90 minutes. Marcelo accepted applause from his teammates after the final whistle and left, waving to the stands as he went.

“One of the greats of world football is saying goodbye, and one of the best full-backs in the world,” said Ancelotti.

Bale, meanwhile, has been struggling with a back problem in recent weeks, the lack of any goodbye just the latest anti-climax at the end of his Madrid career, which for too long has been characterised by drift and irrelevance.

“He couldn’t be on the bench,” said Ancelotti. “He wanted to say goodbye to the fans but he has one last chance, because I think Bale will be fine for the final.”

The draw means Ancelotti’s team finish the season on 86 points, 13 ahead of Barcelona, who could reduce the gap when they play at home to Villarreal on Sunday.

The match almost felt like an exhibition at times, less a competitive league fixture than a cosy end-of-season event.

Before kick-off, there was a double guard of honour, as Real Madrid recognised Real Betis’ victory in the Copa del Rey before Betis saluted Madrid’s triumph in La Liga, the crowd applauding throughout.

As well the warmth shown for Marcelo, there was applause as well for Isco, who is also out of contract at the end of June, and even for Real Betis’ Joaquin, the 40-year-old coming on for his 600th La Liga match in the second period.

Ancelotti picked a strong team that could be the line-up that starts against Liverpool, although David Alaba remains out injured meaning he will be playing his first game in just over a month next weekend if the Austrian is thrown straight back in.

“Alaba will be there to play the final,” said Ancelotti afterwards. “In this type of match, it’s not only about the physical aspect, it’s about ability and experience.”

Both teams coasted through the first half, with neither side playing with enough intensity to force mistakes or precision to create clear chances.

There were periods when Madrid’s lethargy slipped into sloppiness, with Casemiro drawing the disapproval from fans and teammates alike when he rushed a clearance and then skewed a wild shot from close to the halfway line.

Benzema had his first real opening early in the second half and connected well with DaniCarvajal’s cross but the shot was straight at Betis goalkeeper Rui Silva. The Frenchman almost won it with seven minutes left, but fired over after chesting down Rodrygo’s ball in.

Marcelo, Isco and Joaquin all came on and Joaquin should have scored in the 86th minute. Cristiano Tello’s cross to the back post was set back nicely to the striker but, from eight yards, he missed the target.