The country needs the government to work with the opposition 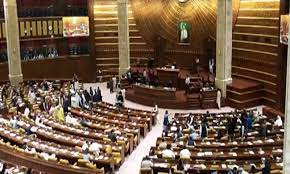 Supporters of both sides, be it on social media platforms, informal meetings or public gatherings, have crossed all limits while going in support and defence of their political affiliations. Supporters of both sides have justified the actions, right or wrong, of their political parties. And in doing so they have not bothered to consider whether the justification provided by them is legitimate or not. Whether the action or act they are justifying is even justifiable or not.

What happened in the Punjab Assembly was horrifying and a moment of shame for the whole country. Not only was the sanctity of the Assembly compromised but wrong precedents were also set by the members of the assembly and their supporters.

The government and opposition, in their accusations and blame game, reach a stage where the values (tolerance, acceptance, integrity) that are the essence of a democratic country have no worth for them. And, this shapes the conduct and behaviours of their supporters who cross every limit to support them.

Having a difference of opinion is a right but forcing others to hold the same is wrong. There is no justification for the incidents that took place with the Deputy Speaker and the Speaker of the Punjab Assembly. Irrespective of the party one supports, one has to agree that those shameful incidents should not have taken place. And, everyone should have condemned those incidents irrespective of the party differences. But, unfortunately, many justified those inhuman behaviours.

This was not the first time quarrelling took place in the Punjab Assembly, but this time things got out of hand quickly. The same is the case with other Provincial assemblies and even the National Assembly where Lawmakers abuse and fight with each other.

The current justification of those horrific acts is not a new phenomenon. Supporters of political parties have reached this stage over time. This sheds light on the lack of a culture of tolerance and acceptance among the followers of different political parties. Everyone seems to be stuck with his opinion that he deems right and is not in a state of mind to listen to others.

The lack of acceptance and tolerance culture among the supporters of different political parties and the current political polarization owes much to the government-opposition relationship in Pakistan over the years.

Government and Opposition both work for the betterment of the country. And their working and productive relationship is very essential for the development of the state. Unfortunately, in Pakistan, this is very rare.

Similarly, the PDM, which came to power with the success of the no-trust motion, considers itself the only solution to Pakistan’s problems and a truly representative government of the people.

However, the PTI on the other hand has called it an “Imported government” that has come to power as a result of a foreign conspiracy.

These are two different narratives. Both sides convince their supporters that they are telling the truth. This shapes the mindset of their supporters. And they believe their narratives to be true without applying their minds. So this makes them stick to their point of view in a way that they believe their views only to be true and every other point of view false.

This has been going on in Pakistan since its inception. The fact that no Prime Minister has ever completed his term and the first democratic government completed its term only in 2013, tells about the Government-Opposition relationship in the country.

It doesn’t matter if we live in a “Naya Pakistan ” or “Purana Pakistan”, Pakistan will progress only if the government and Opposition relationship is developing and encouraging.

The government and opposition, in their accusations and blame game, reach a stage where the values (tolerance, acceptance, integrity) that are the essence of a democratic country have no worth for them. And, this shapes the conduct and behaviours of their supporters who cross every limit to support them.