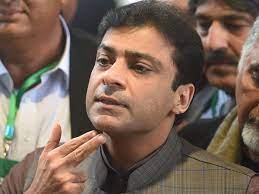 Hamza Shehbaz on Tuesday accused the ruling alliance of hatching a conspiracy to suspend PML-N members to win the chief minister’s election.

Leader of the Opposition in Punjab Assembly and chief minister’s candidate, Hamza Shehbaz said that Azam Nazeer Tarar has informed the Supreme Court today that 40 members of the assembly being suspended.

“We had 200 members for the election of the Leader of the House, if Pervaiz Elahi had majority, he could not left from the back door,” he said.

“You are a veteran player and king of these things,” addressing Chaudhry Pervaiz Elahi he said. “I respect you but will keep the facts above,” he said.

“Speaker is the custodian of the house but what the game is planned, you have to be accountable for it,” Hamza Shehbaz said.
“I will go to the assembly tomorrow to prove majority,” he added.

He also called the Supreme Court to take notice of the situation.

Ahead of an all-important task to elect a new chief minister after Usman Buzdar’s resignation, the Punjab Assembly session has been adjourned till April 16.

The session, with the election of new chief minister on the agenda, was due to be held tomorrow (April 6) but now the Deputy Speaker Dost Muhammad Mazari has adjourned the session till April 16, citing some repair work in the assembly.