Ambiguities regarding no-trust move will clear after March 25: Sheikh Rasheed 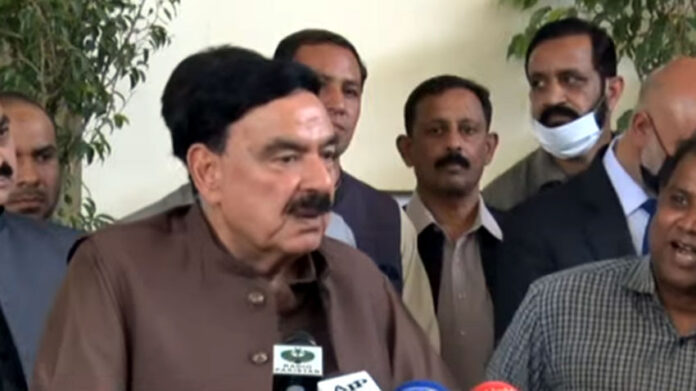 Interior Minister Sheikh Rasheed Ahmed on Thursday expressed confidence that Prime Minister Imran Khan would win the no-trust vote against him, adding that the ambiguities regarding this will start clearing up from March 25.

Addressing a presser in Islamabad, he said during meetings today, the premier directed ministers to remain in contact with the government’s allies.

“Imran Khan will succeed and the allies, who are holding discussions right now … I am confident they will [stand with the prime minister].”

He further stated that he had predicted three months ago that the opposition would not come to the capital on March 23, instead, it would arrive on March 25. “Today, I am telling you the skies will start clearing up after March 25. Their people [will hold a rally] on 25 and then we will have a rally on the 27th.”

He said it was the speaker’s decision when to call the session of the National Assembly, reiterating that Prime Minister Imran Khan would succeed. “I am confident that our allies, who are reflecting and discussing right now, will also decide in favour of Imran Khan.”

He went on to state that it was his duty as interior minister to ensure the protection of common people, MNAs and to look after the law and order situation, adding that paramilitary Rangers and Frontier Corps (FC) officials would start guarding the perimeters of the National Assembly and Parliament Lodges from March 20 while 2,000 officials would be deployed for the capital’s security from March 20 to April 2.

“It will be my effort as interior minister to deal properly with the law and order-related problems,” he said.

The minister also addressed reports that a number of opposition MNAs, as well as some lawmakers from the ruling party, are presently staying at Sindh House in the capital for “security”.

When asked whether the government would take action on reports that a Sindh police security force had been called to the Sindh House in the capital, Ahmed said, “We are not taking any action against anyone right now. [The time] is far away,” he said in reference to the day voting on the no-trust motion would take place.

“I do not want to say anything that will create a problem. [SSU Deputy Inspector General] Maqsood Memon and the force they [the opposition] have brought in are a separate case. The buying and selling (of lawmakers) in Sindh House is a separate case,” the minister said, adding that those who “sold their conscience” never gained respect.

“There are some people in Sindh House. They have called 300-400 policemen. No problem. There are many days [left].”

He also criticised Leader of the Opposition in the National Assembly Shehbaz Sharif’s suggestion to form a national government without the PTI, saying it was the “first time that Shehbaz’s cat is out of the bag”. The minister predicted that Shehbaz would suggest the formation of a technocrat government in a few days.

The interior minister said the nation could see that those who used to raise the slogan of vote ko izzat do (honour the vote) — a reference to the PML-N — were now advocating a national government for the next five years.

“This is a matter of the law and Constitution. Shehbaz has been exposed after what he said yesterday.

“The political match will happen in Islamabad and the opposition will lose,” he said, cautioning the opposition to avoid a clash otherwise they would regret it all their lives.

“Shehbaz played the first shot yesterday [when he said] we will form a national government. Do you think we are sitting here helpless? It is the MNAs’ right to vote and [we want] the whole process to happen in accordance with the law.”

Prime Minister Imran Khan had become more popular because of the opposition’s “foolishness” and more people were coming out in his support, Ahmed said, remarking, “You were sitting helplessly for 3.5 years and now suddenly you are becoming Maula Jutt.”

“We want to see the implementation of the law and Constitution,” he said, adding that MNAs should vote on the no-confidence resolution “in accordance with their conscience and [the wishes of the] people who elected them”.