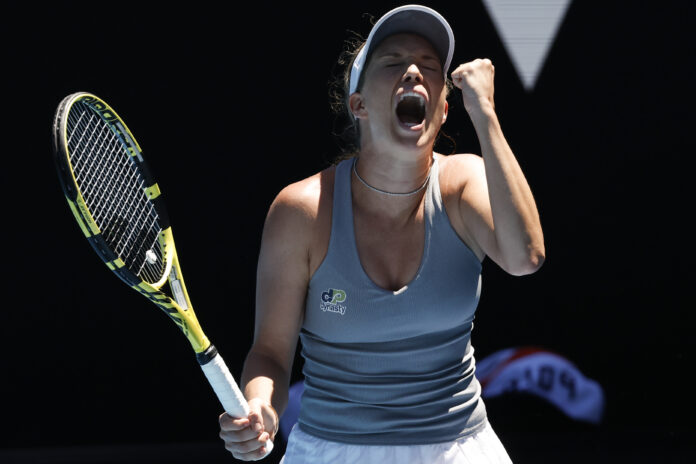 MELBOURNE: Fired-up American Danielle Collins stayed on track for match her 2019 Melbourne Park heroics as she battled through an epic against Elise Mertens to make the Australian Open quarter-finals on Monday.

It earned her the right to play either two-time Grand Slam winner Simona Halep or French veteran Alize Cornet for a place in the last four.

“It was really tough for me, I played a long match as well the other day so I had to make a lot of technical adjustments to be able to get myself moving around,” said Collins. “That was a big challenge.”

She is the third American woman to make the last eight, with Madison Keys and Jessica Pegula also through.

Collins was an Australian Open semi-finalist three years ago, but she has failed to match that effort since.

However, she clinched her maiden WTA Tour titles in San Jose and Palermo last year to rejuvenate her career after a tough start to 2021 when she needed surgery to remove a cyst.

She had a dream start, holding comfortably then breaking Mertens.

But Belgium soon warmed to the task and pushed Collins hard on her next service game.

The American held on but Mertens worked her first breakpoint and converted for 1-3 when Collins netted then threw her racquet to the ground in frustration.

Constantly berating herself, Collins began to wilt in the heat as Mertens stayed cool to win five games in a row and take an enthralling set.

But she composed herself at the changeover and raced to a 3-0 lead in the second set as she found her groove again and put constant pressure on the Mertens serve.

The rallies were again long and Collins prevailed to take it to a decider, where momentum shifted as they exchanged breaks before Mertens ended with a whimper, double-faulting on match point.