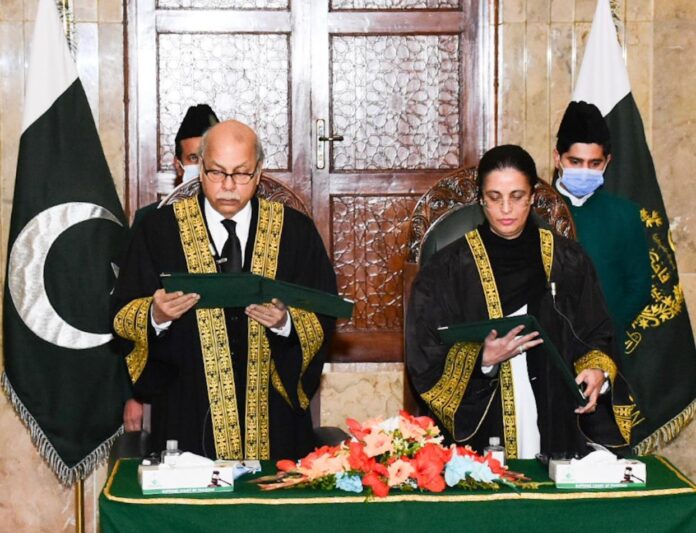 Chief Justice Gulzar Ahmed, who had nominated her for elevation, administered the oath to Malik at a ceremony organised in Islamabad for the purpose.

In a brief interaction with the press following the ceremony, Ahmed said Malik was competent enough to become a justice of the Supreme Court, adding that no person deserved any credit for her elevation.

But when asked if Malik was considered for the promotion for being a woman or her standing as a judge of the high court, the top judge said: “Woman”.

For months, the elevation of Malik, 55, to the top court was intensely debated, and fiercely opposed, as many said it went against the principle of seniority since she was the fourth most senior judge of the high court.

Those in favour of her elevation pointed out that seniority was not a requirement for appointment to the apex court according to the Constitution and that Pakistan’s judicial history is full of instances of male judges from high courts being elevated without consideration to seniority.

Subsequently, on January 6, the nine-member Judicial Commission of Pakistan (JCP) confirmed Malik’s nomination by a majority of five to four.

Though historic, the move was divisive. The JCP had turned down her elevation to the top court last year, and the repeat vote was close. But the development has been widely praised by lawyers and civil society activists as a defining moment in the struggle for gender equality in Pakistan.

Days later, the Parlia­­mentary Committee on the Appointment of Superior Judiciary affirmed her appointment.

And finally, on Friday, President Arif Alvi approved the appointment and notified Malik was as a judge of the Supreme Court.

“In exercise of powers conferred by clause (1) of Article 177 of the Constitution of the Islamic Republic of Pakistan, the president is pleased to appoint Mrs Ayesha A. Malik, a judge of the Lahore High Court, […] as a judge of the Supreme Court of Pakistan with effect from the date she takes the oath of her office,” the notification read.

“I want to congratulate Justice Ayesha Malik on becoming the first woman judge of the Supreme Court. I wish her all the best,” he tweeted.

I want to congratulate Justice Ayesha Malik on becoming the first woman judge of the Supreme Court. I wish her all the best.

Sharing a shot from the oath-taking ceremony, Minister for Information Fawad Chaudhry said the picture was powerful and symbolised women’s empowerment in Pakistan.

“I hope she will be an asset to our judicial hierarchy […] a landmark elevation,” he tweeted.

A powerful picture symbolises the women empowerment in Pakistan, I hope she will be an asset to our Judicial hierarchy… Congratulations #JusticeAyeshaMalik a land mark elevation pic.twitter.com/BZplrXquOK

“It is history in the making for Pakistan’s judiciary.”

“She has broken all barriers in the judicial system and it will allow other women in the system to move forward,” said lawyer and women’s rights activist Khadija Siddiqi.

“I hope this will lead to more women-centric decisions by the judiciary in the future.”

Malik received her B.Com from the Government College of Commerce and Economics in Karachi and studied law at the Pakistan College of Law in Lahore, according to her biography on the LHC website.

She earned her Master of Laws, or LLM, from Harvard where she was a Landon H. Gammon Fellow from 1999 to 1999.

The mother of three also represented NGOs involved in poverty reduction, microfinance, and skills training on a pro bono basis.

She has been credited with rolling back patriarchal legal mores in her Punjab province jurisdiction.

The historic decision prohibiting two-finger and hymen tests on female rape survivors across Punjab was also delivered by her. The tests were deemed “illegal and unconstitutional” by her court.

— With input from AFP