Japan needs both Myanmar and Bangladesh 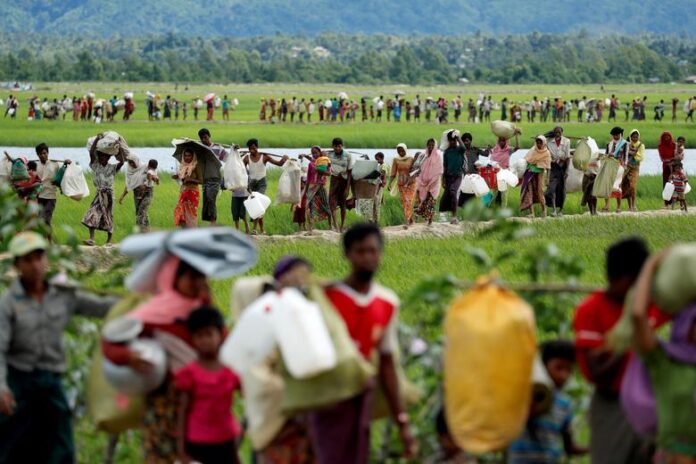 For decades, democracy and human rights have been under siege in Myanmar due to military coups, iron-fisted military rule and persecution of minorities, especially Rohingya Muslims. The military’s wholesale impunity for the outrageous crimes against minorities and other Burmese civilians in the past has set the stage for war crimes committed against Rohingyas. The United Nations labelled the genocidal crackdown as a “textbook example of ethnic cleansing”.

Since the crackdown and forced exodus of Rohingya, Myanmar has faced widespread international pressure: condemnations from the United Nations General Assembly (UNGA) and United Nations Human Rights Council (UNHRC) for human rights violations, rulings from the International Court of Justice and targeted sanctions against the military junta from Western governments. Yet Myanmar remains extremely reluctant to create a conducive environment for a voluntary, safe and dignified return of the displaced Rohingya despite signing an agreement in 2017.

Key regional powers like China, Russia and India are not interested in taking any legal actions against Myanmar thanks to their narrowly defined geopolitical calculations.

Japan, Asia’s liberal democratic leader and longtime strategic, economic and humanitarian partner of Bangladesh, has been largely silent on the Rohingya issue. Japan has provided financial assistance to Bangladesh while it cares for over a million Rohingya refugees. Japan’s former Foreign Minister Taro Kono visited Rohingya camps in Cox’s Bazar in 2019 when he reportedly said that his government’s help and support for the Rohingya will remain uninterrupted. Yet, Japan has maintained silence on the Rohingya and even abstained from voting on every UNGA and UNHRC resolution that sought to put pressure on Myanmar in order to find a solution to the Rohingya crisis.

Now, Japan must bring an end to its cold-blooded policy and take a strong stance for justice and human rights across all international platforms on issues like the Rohingya crisis in line with its own peace-centric constitution. It needs to keep in mind the great words of Martin Luther King Jr, “Injustice anywhere is a threat to justice everywhere.”

Japan needs to urgently realize what is at stake in Bangladesh without a sustainable solution to the Rohingya problem.

Since Bangladesh’s independence from Pakistan in 1971, Japan has been a trusted development partner. Bangladesh, one of the fastest-growing economies in the Asia-Pacific region, is a significant market for Japan, with a population of 170 million. Japan is increasing its investments in Special Economic Zones (SEZs), energy, communication sector, and in the Bay of Bengal Industrial Growth Belt (BIG-B).

On the other hand, Bangladesh has backed Tokyo’s bid to become a permanent member of the UN Security Council, as well as its position on nuclear weapons. Bangladesh, as a fledgling democracy and peace-loving country, has always sought a peaceful and diplomatic solution to all regional and international disputes. Thus, despite some blowback, Bangladesh still aspires to maintain amicable relations with Myanmar in the spirit of its guiding foreign policy ‘Friendship to all, malice towards none’.

Here, Japan can be a “Gap Bridger” by addressing the ongoing Rohingya crisis to build mutual trust and foster co-operation in the field of Preferential Trade Agreement, blue economy, energy production, maritime trade and regional connectivity.

While Myanmar, Sri Lanka, Pakistan, Cambodia allowed China to use their ports of Kyaukphyu, Hambantota, Gwadar, and Ream Naval respectively, Bangladesh has shown a great deal of trust in Japan to build the Matarbari port. The port has the potential to become a major commercial and connectivity hub, as well as a key trade gateway to Asia and beyond. Such strategic investment will surely bolster Japan’s positive economic and political clout in the region.

Asia’s final frontier, Myanmar, on the other hand, is also important to the world’s leading powers both strategically and economically. However, the country’s persistent ethnic insurgency, international sanctions, restricted economic sector for Foreign Direct Investments (FDI), and most importantly, its increasingly pro-Chinese stance have posed a significant risk to international investors.

Bangladesh, as a liberal Muslim country, is concerned about Al Qaeda’s statement to support Myanmar’s Rohingya in September 2017 and the Islamic State’s threat to relocate its base of operations to Southeast Asia. The Rohingya people, who are scattered over 16 countries, may become human resources for extremist networks. This ominous security implication poses a threat to peace and stability as well as to the huge Japanese investments in South East Asia, South Asia, and beyond.

Japan must keep in mind that since the Rohingya crisis erupted in the Indo-Pacific region’s heartland, it has all the possibilities to directly threaten the QUAD countries’ strategic and economic vision that values the rule of law, democracy, human rights, and freedom.

Thus, it is Japan’s vital responsibility to join and influence other key players in the region in order to play a visible and effective role to address major regional issues like the Rohingya crisis for peace and stability.

So far Japan’s silence on the Rohingya crisis has yielded no fruits and it won’t do any good for Asia. Rather this deafening silence will further complicate an already worse crisis.

Now, Japan must bring an end to its cold-blooded policy and take a strong stance for justice and human rights across all international platforms on issues like the Rohingya crisis in line with its own peace-centric constitution. It needs to keep in mind the great words of Martin Luther King Jr, “Injustice anywhere is a threat to justice everywhere.”

Parvej Siddique Bhuiyan
The writer can be reached at [email protected]