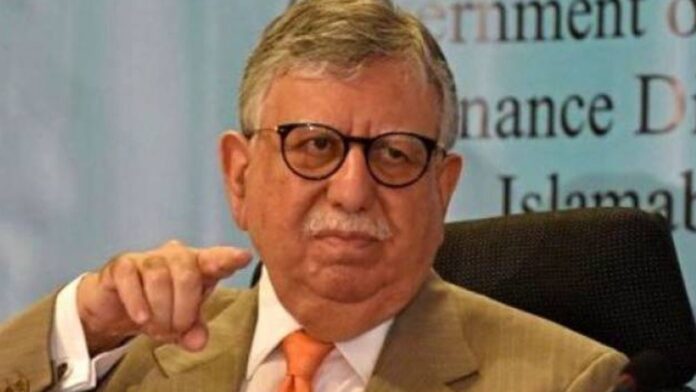 ISLAMABAD: Finance Minister Shaukat Tarin on Monday dismissed reports pertaining to granting complete autonomy to the State Bank of Pakistan (SBP), saying the government will still retain control over the central bank even after the passage of the SBP Amendment Act.

Briefing the National Assembly Standing Committee on Finance, Tarin said that the government will propose names for the SBP board of directors and appoint the board members as well.

The impression that it will curtail powers of the government is not correct, Tarin said during a heated standing committee session, in which he traded barbs with the opposition leaders including Pakistan Muslim League-Nawaz (PML-N)’s Ahsan Iqbal.

“The IMF told us to stop borrowing money from the State Bank,” he said, adding that the government has not borrowed from the SBP for the past two and a half years. “However, the earlier loans by the SBP amount to Rs7,000 billion,” the minister added.

The finance minister further said that in March, Pakistan was given $500 million by the International Monetary Fund (IMF) on strict conditions that were accepted by the government. “But the current legislation is very different with respect to those demands,” he added.

According to Tarin, it had cost Pakistan $60 billion to artificially stop the devaluation of the rupee. At this, PML-N leader Ahsan Iqbal retorted that exports have not increased after the rupee went through a 40 percent depreciation.

Meanwhile, briefing the committee, SBP Governor Reza Baqir also claimed that the government will retain full control of the SBP despite the amendments in the law pertaining to the central bank.

He termed the news reports regarding the “auction of the SBP to the IMF” as fake news and said the “draft of the bill is not secret any more which says that the government will retain control” of the SBP. Baqir said the impression that the IMF is getting control of the central bank is “wrong”.

He added that he used to work for the IMF, but it was not a crime to work in a global financial institution. According to the SBP chief, he was a Pakistani national and didn’t hold another nationality or even a residential permit. “The reports in media over these issues are completely baseless,” he added.

On January 2, the Prime Minister’s Office had expressed reservations over the SBP bill and sought deletion of certain parts. Sources said that the PM’s Office had also raised several other objections over the SBP bill, which envisages complete autonomy for the central bank and places a complete restriction on the government’s borrowing from the SBP.

The premier’s office had disagreed with giving complete autonomy to the SBP and sought the deletion of section 46 B (4) from the bill.

On January 8, the SBP had issued two papers to offer clarity on the issue. It had said the proposed law would neither compromise economic sovereignty nor would it become a “state within a state.

The amendments, it had added, would help in boosting coordination between the finance minister and the SBP governor to better strike a balance between economic growth and inflation reading.

Its officials would remain answerable before parliament and that the National Accountability Bureau and the Federal Investigation Agency (FIA) could investigate alleged criminal matters.

“However, indemnity is being proposed for actions taken in good faith, so that where due care and due process are followed, officials are not afraid to take actions. This is quite common in central bank laws and is considered an international best practice,” the paper had added.