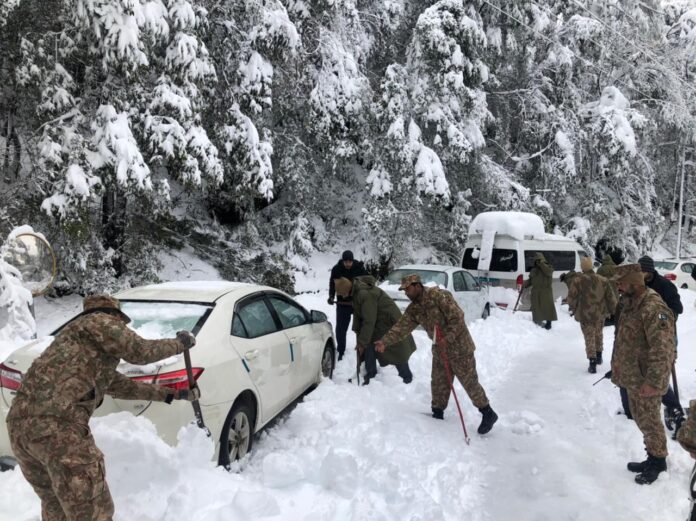 LAHORE: In an apparent bid to help save the skin of powerful bureaucracy, the preliminary investigation report into the Murree tragedy Sunday found fault with dilapidated roads in and around Muree and held poor ‘drivers’ responsible for the fiasco.

The inquiry report, which was submitted with Chief Minister Usman Buzdar, who constituted another committee headed by the additional chief secretary for further investigation.

The report said that poor conditions of the roads in the hill station and its outskirts was one of the factors that caused the enormous traffic jam, ultimately leaving at least 22 tourists freezing to death in vehicles trapped by the blizzard.

The report submitted to the Punjab government stated that the roads had not been repaired for the past two years and freezing temperatures led to more potholes on the roads, hampering the flow of traffic.

The report also blamed the authorities concerned for not removing the snow from the main exit point of the tourist resort town which also contributed to the massive traffic jam.

The probe also revealed that the tourists were forced to stay in their vehicles due to prolonged power outages in different parts of Murree.

The ban on entry of vehicles was imposed only after the intervention of deputy commissioner and CPO Rawalpindi district, read the report, adding that drivers of the machinery to remove snow from the roads also did not arrive on time.

The report also highlighted that there was no parking plaza in Murree where tourists could park their vehicles.

After going through the probe report, Chief Minister Punjab Usman Buzdar formed a new committee and vowed to take “impartial action” against all those found negligent in their duties.

A notification was issued after names of its members were finalised, according to which Additional Chief Secretary Home Zafar Nasrullah has been appointed as the convener.

Provincial secretaries Ali Sarfaraz and Asad Gilani have been named as members of the committee.

In addition, Assistant Inspector General Farooq Mazhar has also been named as a member. The notification also listed the Terms of Reference (ToRs) under which the committee will operate.

According to these terms, the committee will ascertain which government departments were responsible for the crisis situation that unfolded in Murree.

It will also assess what measures were taken to control the influx of visitors and vehicles. The committee will look into what precautionary measures were taken by institutions in light of the weather advisory issued by the Met Office. It will determine whether a warning was run on media to dissuade people from travelling to the tourist destination.

The committee will probe what traffic control measures were taken amid the snowstorm and after reports of the adverse weather conditions were received, what safety measures were implemented.

The report as a result of the findings obtained will be submitted to the provincial government in seven days.

Earlier, Buzdar issued a statement on Twitter to announce a series of measures being taken by the Punjab government to institute permanent solutions to longstanding issues in the tourist destination.

He said that the government’s foremost priority had first been to complete rescue operations.

Thereafter, a “long consultative session” was held in Murree accompanied by a “detailed briefing”.

“Some important decisions have been taken so that with short term and long term solutions, a permanent solution to longstanding issues can be arrived at,” the chief minister said.

Buzdar said that in seven days, a probe committee supervised by the additional chief secretary for the Punjab home department, will submit a report and “indiscriminate action” will be taken against those found negligent in their duties.

The chief minister said that a decision “in principle” has been taken to give Murree the status of a district.

“We will immediately appoint officers of the ranks of superintendent of police and additional deputy commissioner in Murree,” he added. Buzdar said that two new police stations will be established in the city.

In addition, two new parking plazas will be constructed in Sunny Bank and Jhika Gali and a shuttle service will be run between these points.

In a statement, Buzdar said that there were a total of 33,745 vehicles in Murree till last night, much higher than what the hill station can accommodate.

The chief minister in his statement today said that Rescue 1122 staff will be provided trail bikes and wireless communication systems.

Furthermore, under a new traffic management system, new connecting roads to Murree will be constructed.