Another year passes without the Kashmiris getting self-determination 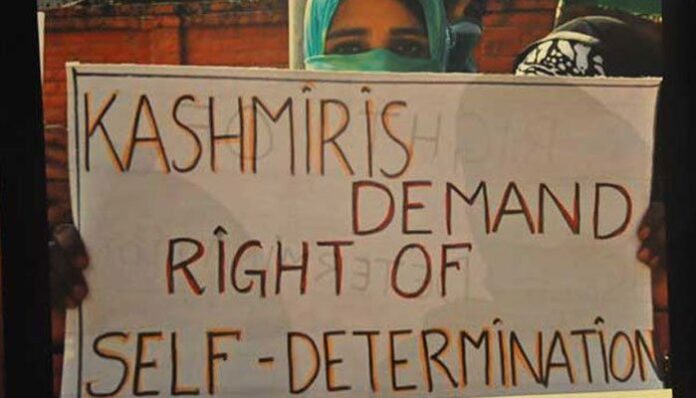 Kashmiris across the Line of Control as well as people from all walks of life, all over the world, observed the Self-determination Day on January 5.  The day marks the 73rd anniversary of the United Nation’ Security Council’s resolution which calls upon India and Pakistan to let Kashmiris determine their fate through a plebiscite.

Instead of taking steps conducive to holding a plebiscite, India has been carrying a reign of terror in Kashmir. Prominent Kashmiri leaders have all along been highlighting the plight of the Kashmiris under the Indian yoke (extrajudicial killings, arbitrary arrests, torture, ill-treatment of women, ban on political activities and violation of basic human rights).

India’s view of usurped Kashmir is untenable. The UN should declare it a rogue state, and impose sanctions on it

Even Mehbooba Mufti, a former BJP ally, was compelled to say, “Kashmiris feel that they are literally imprisoned in a cage from which almost all exit routes are barred save one, to India, which is also not without peril.” A.G. Noorani, in a similar vein, said, `Kashmiris are distrusted and treated poorly in many parts of India, whether as students or as traders.’

Earlier, the United Nations General Assembly (UNGA) unanimously adopted a Pakistan-sponsored resolution, titled “Universal Realisation of the Right of the Peoples to Self-Determination”. It unequivocally supports the right to self-determination for all peoples under subjugation, alien domination and foreign occupation”. With close to 900,000 troops, police constabulary and security sleuths deployed, the Indian-held Kashmir is practically an Indian colony.

A similar Pakistan-sponsored resolution was adopted last year with little tangible follow-up The resolution affirmed the right to self-determination for peoples subjected to colonial, foreign and alien occupation. The resolution called on “those States responsible to cease immediately their military intervention in and occupation of foreign countries and territories”.

Wolfgang Danspeckgruber (editor), in the book The Self-Determination of Peoples: Community, Nation, and State in an Interdependent World, deals with the subject from all angles. He covers issues of sovereignty and self-determination in contemporary world affairs.  The book covers the conceptual, political, legal, cultural, economic, and strategic aspects of self-determination. Danspeckgruber says: “No other concept is as powerful, visceral, emotional, unruly, and steep in creating aspirations and hopes as self-determination”.

Sumantra Bose argues, `The Security Council’s resolutions – notably those of March 1951 and January 1957-  is unequivocal that such participation and representation could not be regarded as a substitute for an internationally supervised plebiscite (Sumantra Bose, the Challenge in Kashmir: Democracy, Self-Determination and Just Peace, p.166). Bose had referred to the UN Security Council’s two resolutions that rejected so-called accession by the constituent assembly. These resolutions, No 91(1951), Document No, S/2017, Rev.1, Dt 30 March 1951 and Resolution No. 122 (1957), duly rejected the ratification of the accession by the constituent assembly in Srinagar. Resolution No. 122 (1957) was adopted by UN Security Council at its 765th meeting on 24 January 1957.

In international law, a territory is considered “occupied” when it is actually placed under the authority of the hostile army. The definition of occupation and the obligations of the occupying power were initially codified at the end of the 19th century. The definition still in force and commonly used nowadays is the one contained in the Regulations Concerning the Laws and Customs of War on Land annexed to the Fourth Hague Convention of 18 August 1907 (H.IV). Section III of the regulations details the rights and obligations of the military authority over enemy territory (Articles 42–56).

The ICJ regards these regulations as equivalent to international customary law (infra Jurisprudence). This definition takes into account the effective control of the territory by a hostile authority and seeks to regulate the responsibility of such an authority (H.IV Art. 42).

Contemporary international humanitarian law has clarified and added to the rights and duties of occupying forces, the rights of the populations of occupied territory, and the rules for administering such territory (GIV Arts. 47–78; API Arts. 63, 69, 72–79)

According to humanitarian law, occupation falls in the definition of international armed conflict and is regulated as such by the four Geneva Conventions and Additional Protocol I. The occupying power faces specific obligations where it has an effective control over the territories occupied. These include obligations related to respect human rights, law, and order, in addition to respect for relevant provisions of humanitarian law related to occupation. The basic obligations of the occupying power under humanitarian law are to maintain law and order and public life in the occupied territory (H.IV Art. 43).

India is bound to let Kashmiris exercise self-determination right. If India disobeys UN resolutions it is a rogue state, pacta sunt servanda, treaties are binding on the parties.

Self-determination is a legal right of people whether the decolonization process is perfect or imperfect, as in case of occupied Kashmir, in which the UN became involved.

Karen Parker points out, `The disposition of [illegally occupied] Kashmir has not been legally decided. It is not part of any country and yet we have the failure today of the realization of the expression of the self-determination of the Kashmir people (Karen Parker, Understanding Self-Determination, the Basics, Collected papers and proceedings of the First International Conference on the Right to Self-Determination).

Malcolm N. Shaw says, `Self-determination became the legal principle that fuelled the decolonization process, both obliging the colonial powers to grant independence (or another acceptable political status) and endowing their territory in question with a special status and thus, international legitimation (Shaw, Peoples, Territorialism and Boundaries, European Journal of aInternational Law 8, no, 3, pp 478-507).

India’s view of usurped Kashmir is untenable. The UN should declare it a rogue state, and impose sanctions on it.

Mohmmad Saad Malik
The writer is a free-lance contributor. He hails from Srinagar. He is currently a student of PMAS-Arid University Rawalpind Cantt.