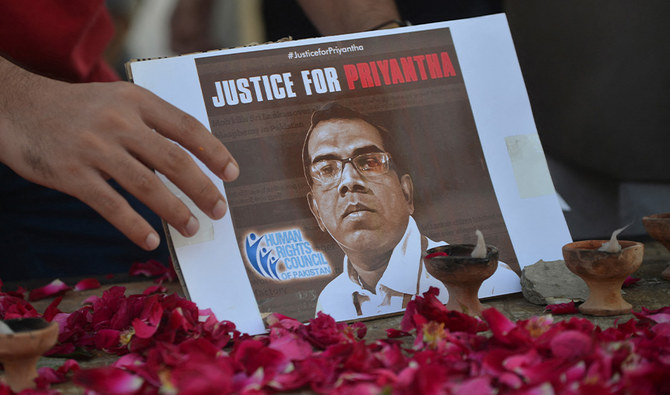 SIALKOT: A new picture and clips have emerged of the premises of the Sialkot factory where Sri Lankan national Priyantha Kumara was lynched by a mob last month.

The picture purportedly shows Kumara, the manager of the factory, tearing down a sticker with two of the workers standing close to him.

The clips have been obtained from CCTV cameras installed at the factory.

One video shows Kumara trying to escape the angry mob on the rooftop of the factory. A worker can also been seen hiding on the roof. Another clip shows the frenzied mob attacking Priyantha Kumara on the rooftop.

In a third video, a person purportedly from the factory management is seen trying to prevent the workers from attacking the manager but they didn’t listen to him and continue beating Kumara as some of them incite the violence.

Surprisingly, CCTV footage of three locations are missing. Investigators believe that the person responsible for controlling the CCTV cameras might be hand in gloves with the suspects and discarded or concealed the footage.

Priyantha Kumara, a 49-year-old Sri Lankan national, was lynched by a mob of workers at a factory on December 3, where he was working as manager. A first information report (FIR) was registered against hundreds of unidentified men, including workers of the factory.