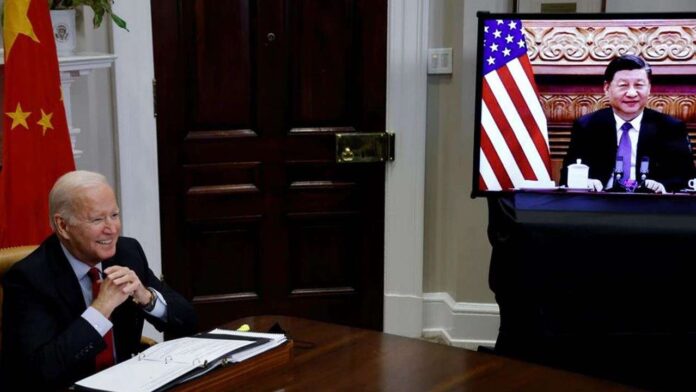 The recent plenary meeting of the Chinese Communist Party ended with the much-anticipated talk between Chinese President Xi Jinping and US President Joe Biden. While both leaders welcomed the online summit, nothing conclusive came as a result because there was no joint statement, be it on climate change, cyberspace, or nuclear issues. This has been the first time in 10 months that both leaders engaged in direct talks since Mr. Biden came to power. Of course, Trumpian rhetoric didn’t prevail, yet beneath the façade of diplomatic gestures, the US-China relation might not see the light at the end of the tunnel.

While China faces a huge number of challenges. such as the global image problem, economic crunch, demographic issues, and internal disputes, the USA doesn’t seem invincible either in the backdrop of woke-ism, the Critical Race Theory, and, yes, economic doldrums. However, what has made the two archrivals talk to each other was interdependence on critical areas.

Climate change stands out among all the bilateral issues they almost agreed on —only to the level that it is an existential crisis. No sooner did the conversation on it begin, than China came up with its being a developing country and snubbed the zero-emission pledge. On his part, Joe Biden tried his best to make this issue a path to cooperation. Furthermore, the USA didn’t change its long-held policy on Taiwan, which the USA doesn’t believe to be an independent territory, at least on paper.

Pakistan is an all-weather friend of China and must not forget that the USA still rules the roost. Getting the ire of the latter may not serve the national interest of Pakistan. Unfortunately, since the Biden Administration assumed office, Pakistan has been snubbed. Jumping on the rhetoric of strategic depth and overly supporting the Taliban invasion, the current hybrid regime lost its entire links with the USA

In spite of a three-hour talk, there was nothing conclusive, to put it bluntly. Biden highlighted the human rights abuses in Xinjiang, Tibet, and Hong Kong, while Xi compared US support of Taiwan with “playing with fire”. The USA doesn’t have any coherent policy on China except unnecessary babbles on Taiwan and Xinjiang. After the talk ended, Biden called Taiwan “independent.” In a sense, the USA seems to shift the rhetoric based on its need.

Trade, which has been the bone of contention between them, came in discussion only occasionally —far from agreeing on anything.  The Chinese term the recent inflation in the US a consequence of the US-China trade war, but the trade war had started three years ago. Even though there is some truth to that argument, the USA is in no mood to give any relaxation, which the Chinese regime desperately needs.

The tone of the meeting depicts the inevitability of confrontation between the two powers on many fronts. Although they outright rejected any comparison to the Cold War for the complexity of the technological world, the writing on the wall tells another story. There is no doubt the USA and China are deeply immersed, not to mention the globalized structure of today’s world. The real issue is that such a world seems more prone to conflict than the previous one.

For almost two years Xi hasn’t left China. This decision came as a result of covid-19 and lately the restructuring of the Chinese economy focusing on domestic stability. Despite being the highest contributor to climate change, Xi skipped the COP26 meeting at Glasgow the previous month, which ended in nothing conclusive. much like the meeting between the two leaders. Given that the Beijing Olympics 2022 is around the corner, it seems Mr. Xi will not leave the country for a couple of months.

To give the talk a good cover, both leaders sugarcoated their words and promised to continue their work without resorting to mutual harm. On the one hand, Biden stressed peaceful competition; on the other, Xi highlighted the win-win mantra. However, neither of them seems probable in view of the US arms supply to Taiwan this week.

Both the USA and China need to understand that it takes less time to go from heated arguments to an all-out war when there is no goodwill. Against the backdrop of existential threats, it will be a pure disaster for the world to engage in any form of confrontation. Historian Yuval Noah Harari terms climate change, nuclear and artificial intelligence to be enough to obliterate the very existence of human beings. Put to it the breathtaking inequality prevailing across the globe. Against an ocean of people, there are a few billionaires who possess much of the wealth. Elon Musk, for example, owns more wealth than Pakistan’s entire GDP.

The recent talk between the world’s leaders has to be the beginning of an era for much-needed problems at hand. Both leaders should meet in person after they sort out their differences. The US must fathom that neither China is the USSR nor can today’s complex world be compared with the Cold War era. For a number of global challenges, the US needs China on its side, otherwise, all the solutions will be written on water.

In the meanwhile, China should also realize that it owes a lot of its progress to the US-based global order. China had been consistently propped up by the USA since it liberalized its economy in 1978 under Deng. China has to be open about its unfair trade deals, human rights violations, and allegedly intellectual property theft.

Pakistan is an all-weather friend of China and must not forget that the USA still rules the roost. Getting the ire of the latter may not serve the national interest of Pakistan. Unfortunately, since the Biden Administration assumed office, Pakistan has been snubbed. Jumping on the rhetoric of strategic depth and overly supporting the Taliban invasion, the current hybrid regime lost its entire links with the USA.