Reasons behind caste-based reservation in India

Trying to remedy past discrimination 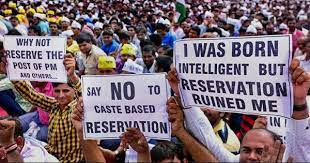 In today’s India the programme of affirmative action or reservation based on caste criteria has been set on different dimensions and practical experiences as existed in pre- and post-independence society, such as, social discrimination, economic discrimination, compensation for historical wrongs, and so on., Not to talk about the social discrimination at the time of independence, even today, especially in rural India, despite the collapse of the traditional subsistence economy, caste continues to exert its strong presence in different forms and manifestations.

Untouchability, a cursed legacy, is present and survives by adapting to new socio-economic realities where tea stalls keep separate cups for Dalit customers which they have to wash themselves, not buying milk or vegetables from Dalit vendors, making Dalit children sit separately at the back of the classroom in schools, and the worst form of punishment comes when a marriage is performed flouting the caste norms between a Dalit and an upper caste woman. Although in urban India we hardly come across such instances, it’s a shame to continue the practice, outlawed more than seven decades ago. Constitutionally, socially and practically it should have no place in any part of India in which we are committed to live with dignity of labour and without any form of discrimination.

The second major cause of making the caste a basis for reservation is economic discrimination which reflected in our society in public and private enterprises where we found a wide gap in wages of SC/ ST/ and OBC workers in comparison to ‘Others’. As these two groups enter the market with substantial differences in education levels, their pre-market discrimination showed a thorough gap in the whole professional life wherever they move and work regardless of the position of the market, active or inactive.

Surprisingly, this factor is working more explicitly in urban areas where identification of caste is difficult and the nature of market is both more modern and formal than in rural and less developed zones. In the context it’s also a fact that urban markets are supposed to more merit-oriented. and naturally recruitment decisions are taken on access to education and quality of education, access to resources which enhance overall learning and develop skills suitable for the work as well as responsiveness.

In addition, this factor becomes clearer when we focus the role of networks in informal and personalized recruitments where “who you know” is often more important than “what you know” as a well knitted chain of people you know, especially in case of important places and famous institutions where talents are easily earned and used in favour of people produced from the same institutions. Employers across the country, including those who belong to Multinational Companie,s care much about social identity, region, and merit along with conviction that merit is distributed by caste and things we value most. In the circumstances, it is clear that only preferred position for reserved category is not a remedy of discrimination and the public sector is only place, they can be employed or engaged for improvement of their overall status in society as they found very limited entry in private enterprises.

In pre and post-Independence periods the provision for reservation was made to uplift the position of Scheduled Castes and Scheduled Tribes through adequate representation who were also lagging far behind socially, educationally and as a result in employment in comparison to other members of society who were in the mainstream of society, politics and decision-making of the State as well

In fact, the past ill-doings have generated systematic disparity between caste groups and actively kept untouchables at the very bottom of the social and economic order. It motivated the Indian government to compensate for the historical wrongs and enact legislation for reservation for some of these disadvantaged groups in education, public sector employment, and politics. Although, from the beginning the Indian government provided for reservation to compensate the historical injustices, it is not sufficient to resolve the problems of discrimination which led to exclusion to a large number of unprivileged people, originated to the division of labour in the household, in the community, and in the world of work.

The contours of exploitation evolved and muted in different forms over the centuries, its manifestations like inequality and injustice in society remained the same throughout the period. In the context, deep and large-scale exploitation gave rise to exclusion which contains multiple dimensions-social, economic, and political. It is not simply used to describe a situation but also to focus on a process which excludes individuals or groups from communities, livelihoods, and rights, thus depriving them of freedoms that are constitutive of, and instrumental in development, which is a source of well-being for people, ordinary people. Closely related to it is the concept of exclusion from markets available in society. In general markets exclude people as consumers or buyers as well as producers and sellers if they do not have income, People excluded from the society experience the feeling if they have neither assets, physical or financial, which can be used to yield an income in the form of rent, interest, or profits.

In pre and post-Independence periods the provision for reservation was made to uplift the position of Scheduled Castes and Scheduled Tribes through adequate representation who were also lagging far behind socially, educationally and as a result in employment in comparison to other members of society who were in the mainstream of society, politics and decision-making of the State as well.

For this purpose, the Constitution itself provided a three-fold scheme bearing a. Protective arrangements, which required to enforce equality, to provide punitive measures for transgression, to eliminate and to eliminate established practices that perpetuate inequality; b. Affirmative action, which provided positive or preferential treatment in allotment of jobs and access to higher education for integration in the mainstream society. In Independent India the reservation for SCs and STs community was first implemented in 1950 with 12.5 percent and 5 percent respectively which later revised in proportion as 15 percent and 7.5 percent in direct recruitment in services of Central and State Government. They were getting the facility of reservation in promotion since 1954 and further in the year 1982 the government specified 15 and 7.5 percent jobs in public sector undertakings government-aided educational institutions as quota reserved for SC and ST  candidates.