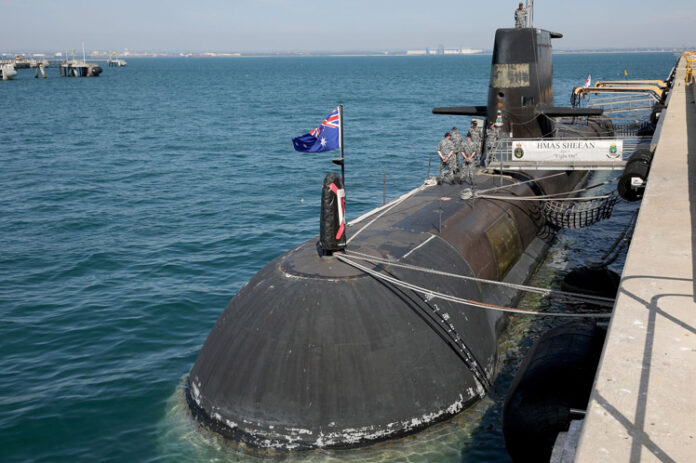 AUKUS is named after Australia, the United Kingdom, and the USA. On 16 September 2021, AUKUS was declared. It is a historic security and military alliance for the Pacific. The alliance will provide Australia with defense technology, including nuclear submarines and powerful missile management. The alliance members will also exchange defense intelligence between them. Cyber space, artificial intelligence, quantum technology, safe navigation strategies, joint military offices, and various military operations will be conducted from the same platform. This military alliance is basically to deal with the influence of China. Last month, the USA and earlier Australia and the United Kingdom withdrew troops from Afghanistan, focusing on the Indo-Pacific and China.

The USA believes that having nuclear-powered ships could quickly pave the way for the development of atomic bombs. That is why it provided nuclear propulsion technology to the British ally. Nuclear-powered submarines will prepare Australia to enter the nuclear power club. If there is a war with China, it will be a nuclear war. How many days and at what time the nuclear sub will reach Canberra has been kept secret. However, it is thought that it will take a decade to supply the full 12, at least eight, nuclear-powered subs.

As a result of this agreement, Australia has canceled the $90 billion submarine agreement with France. France was the first to lose to the USA’s AUKUS diplomacy. France has lost much of its status as a global power. The fall of Paris has been expected since the placing of the French Army under US command in NATO’s Integrated Command in 2009.

France is not just a European metropolis; It is a constellation of regions around the world after the USA, making it the second largest maritime domain in the world. The Indo-Pacific and adjoining regions are home to 1.6 million French citizens. That is to say, France is a power in the Indo-Pacific region.

The decision by Australia to cancel its agreement with France to supply submarines and to get the kind of nuclear-powered submarines used by the Americans and British instead, is a rude blow to the French. The decision was officially announced to France just hours before it was made public, when there was no time at hand. Therefore, the deal of these three countries is being called a betrayal.

According to Kevin Rudd, former Prime Minister of Australia and now President of the Asia Society and one of the world’s leading experts on the Anglophone world, China Observer, a nuclear or conventional submarine has a lifespan of 30 years. The life of a nuclear power reactor in a submarine is the same. Thus, Australia will not need to develop nuclear power generation separately for submarines. The Australians will get 12 submarines. But no technology will be transferred outside of training on how these submarines can be maintained, or Australians will not have the freedom to operate these submarines of their choice.

In other words, Australian submarines will only support the US Navy, not be an independent military force. The Kiwis are happy that they will use the card as a bargaining chip when negotiating with China, a major trading partner. The US trump card is that Taiwan could be bloody at any time to get China in the bag.

China says AUKUS is another sinister move by the USA aimed at a military confrontation in the South China Sea. Since 2015, the Chinese military has been training to occupy Taiwan’s presidential palace, and they have built a replica.

Influenced by the ideology of the non-aligned movement, ASEAN did not respond, but Indonesia has already expressed frustration. ASEAN wants to create a huge free trade area, which includes China. NATO is also silent. It had ambitions to expand into the Indo-Pacific region, and NATO understands that it will not be part of any game. New Zealand declared its adherence to the policy of nuclear disarmament. As a result, nuclear-armed ships have been refused entry to its ports.

The AUKUS deal brings the issue of Indo-Pacific strategic security back to the forefront and has also affected the balance of power in South Asia between nuclear rivals Pakistan and India.

Unfortunately, after the failed military operations in the Middle East and Central Asia, it seems that the Western bloc wants to test the depth and edge of the waters of East Asia and the Pacific Rim. Barack Obama wanted to take the ‘pivot to Asia’ policy forward, which is being brought back. Once the spark of a nuclear sub is heated in the ocean water, it may not be possible to control that arms race

Analysts are describing AUKUS   as a “new Cold War” between the USA and China. If Australia is equipped with nuclear weapons, India will also argue in favor of getting more nuclear subs and other nuclear weapons.

US-Indian cooperation on sensitive defense technology could upset the balance of strategic power in South Asia. If Modi’s BJP retaliates by increasing its own naval nuclear capability, Islamabad will not sit still on the nuclear strategic chessboard of maritime security to strengthen its alliance with China.

We have seen that the major powers are operating nuclear warships in the Indian Ocean in clear disregard of the 1968 NPT, the UNSC Resolution 255 and the UNSCR 984 Nuclear Security Assurance. Therefore, without going into any alliance, Bangladesh needs to acquire nuclear subs for its maritime, island and offshore security.

India has been very careless about nuclear energy. In Jharkhand, Tamil Nadu and Nagpur, and state-sponsored nuclear smuggling and uranium theft have easily led to the smuggling and sale to terrorists on the black market. This is a serious concern for the international community. Carelessness can lead to many catastrophes.

India has now embarked on a hegemonic ‘maritime brinkmanship’ in South Asia. Rapid military modernization and the acquisition of naval technology have increased the threat level of Pakistan.

US anti-China security concerns are conducive to India’s foreign policy. There is no doubt that Delhi will now further strengthen its naval alliance with Washington. That is why Islamabad may be motivated to make an awkward deal to resist India.

To maintain peace in the Indian Ocean and the Arabian Sea, Pakistan has already expressed its desire to further enhance its naval capabilities through modern warfare management (CMS), long-range patrol jets, unmanned warplanes, sophisticated weapons, satellites and surveillance systems. This arms race could make the security situation in the Subcontinent more unstable and complicated.

France has accused its allies of double standards for scrapping its multimillion-dollar deal with Australia. The French foreign minister said the relationship had given rise to a “serious crisis”. It is quite clear that the nuclear submarines are targeting China. Will Australia’s nuclear submarines protect the country from a major defense threat from tiny Pacific states, or will it make it more dangerous? That is now another matter of reckoning.

The AUKUS debate raises a number of other issues, such as the possibility that even close allies could be ditched if trade contacts are endangered. The French defense industry could have achieved a lucrative deal if the Australians had taken the lead. France will never forget this. There are many historical reasons for this. As the Western bloc opens up new fronts in the Indo-Pacific region, China will also step up its preparations. Withdrawing troops from Afghanistan and Iraq, the world thought, had quenched the US hunger for global military courage. The sudden action and betrayal of France proves the idea futile. Washington is preparing for a long-term military confrontation with China.

To keep China under pressure politically and militarily, the vast sea area will be controlled by Quad + (United States and United Kingdom, as well as Australia, India and Japan). It seems that Washington is preparing for a war in a decade or two. But Beijing may not give anti-China forces time on the Taiwan question.

Unfortunately, after the failed military operations in the Middle East and Central Asia, it seems that the Western bloc wants to test the depth and edge of the waters of East Asia and the Pacific Rim. Barack Obama wanted to take the ‘pivot to Asia’ policy forward, which is being brought back. Once the spark of a nuclear sub is heated in the ocean water, it may not be possible to control that arms race.