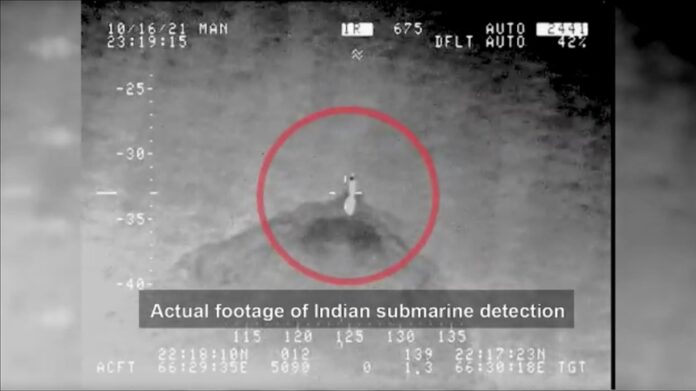 KARACHI: The navy said it “detected and blocked” an Indian submarine from entering Pakistan’s territorial waters in the northern part of the Arabian Sea Saturday.

‘Pakistan Navy with its unremitting vigilance and professional competence has once again detected and blocked the Indian submarine on 16 Oct 21 from entering into Pakistani waters.’ – ISPR pic.twitter.com/bA5HYiL5rN

This is the third attempted incursion by an Indian submarine thwarted by Pakistan since 2016, the navy said in a statement issued Tuesday.

“Pakistan Navy with its unremitting vigilance and professional competence has once again detected and blocked the Indian submarine on October 16 from entering into Pakistani waters,” read the statement.

“During the prevailing security milieu, a strict monitoring watch has been kept by Pakistan Navy to safeguard maritime frontier of Pakistan,” the statement added.

A video released with the statement showed infrared footage of a submarine mast on October 16 between 11:18 pm and 11:36 pm.

The navy foiled previous such attempts by Indian submarines in 2016 and 2019. There has been no response from the Indian government on the latest intrusion.

Officials of India’s Defense Ministry, Foreign Ministry, and navy also did not respond to Anadolu Agency’s requests for comment.

Nuclear rivals and neighbors Pakistan and India have been locked in a string of disputes since the division of the Indian subcontinent in 1947, the most prominent being over the disputed Himalayan valley of Jammu and Kashmir.

Both hold parts of the region but claim it in full, while a small sliver of Kashmir is also under Chinese control.

The militaries of the two nations have been on high alert since 2019 when Pakistan shot down an intruding Indian warplane in Kashmir and captured its pilot, Abhinandan Varthaman. Varthaman was later returned to India to avoid an escalation in tension.

Already fraught relations between the neighbors further plummeted after New Delhi scrapped the special status of Indian-occupied Jammu and Kashmir in August that year.

The move prompted Islamabad to downgrade its diplomatic relations and halt trade with New Delhi.

In April last, Pakistan and India agreed to halt cross-border firing in the disputed region of Kashmir, promising to adhere to the 2003 ceasefire accord that had earlier been largely ignored. That ceasefire is still holding.

— With additional input from AP