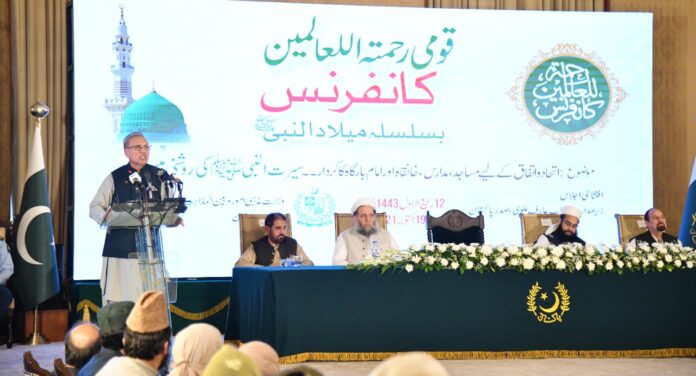 ISLAMABAD: Referring to educational institutions, mosques, media and family system as four pillars of the nation, President Dr Arif Alvi Tuesday asserted their role could bring about a revolution in the society.

The president, addressing the inaugural session of the National Rehmatul-lil-Aalameen Conference held to celebrate the festival of Eid Milad un-Nabi, said that keeping in view the dearth of morality and dominance of vested interests in international affairs, the teachings of ethics to the new generation was all the more important.

He told the gathering — comprising the ministers, MPs, diplomats and religious scholars from across the nation — the message coming out of the mosques should contribute to the nation-building.

“And this nation is emerging. This nation has opted for all the right courses. And Allah has also made arrangements to open up avenues for this nation. You fought Covid-19. God willing, peace will return to Afghanistan and you will get ample opportunities. Your direction has been determined,” the president said.

He also urged the media to play an active role in nation-building as the mere broadcast of the entertainment programmes would not serve the purpose. Similarly, he said, the family system was also essential by virtue of being the basic institution for moral upbringing.

Titled “Role of mosques, seminaries, khanqahs and imambargahs in the promotion of unity and harmony in the light of teachings of Prophet Muhammad (PBUH),” the conference was arranged by the Ministry of Religious Affairs.

The president, who earlier distributed prizes and certificates to the authors of books on the life of the prophet in several categories, told the participants the prophet’s teachings were a source of guidance in all aspects of life.

The prophet taught unity, human respect, rule of law, justice, equality and ethics to the followers while being soft-spoken and tender in temperament.

He said that besides being a worship place, Al-Masjid an-Nabawi used to be the hub of social and political activities including court, educational institute and healthcare.

The president urged the role of society and media to do away with backbiting as even quoting anything out of context also fell in the same category.

He said the presidency had also initiated a practice of airing Friday sermons from its mosque given by renowned religious scholars on varying social and religious issues.

President Alvi said after assuming office in 2019, he had written to the Council of Islamic Ideology to seek mosque’s role on cleanliness, water wastage, tree plantation, and women property rights.

He spoke high of the religious scholars who evolved a consensus to allow social distancing and even for praying at home for vulnerable people during the Covid-19 pandemic. Due to the very prudence, effective strategy and public cooperation, the country was able to tackle the pathogen, he added.

“I firmly believe that change in Pakistan will come from mosques,” he commented.

President Alvi also advised the Ulema to inculcate the leadership qualities and improve their communication skills which he said was crucial to effectively convey the message.

In his address, Minister for Religious Affairs Noor ul-Haq Qadri said the obedience and training of the prophet changed the lives of his companions altogether and made them an impressive figure.

He said the religious scholars should follow the same course and revive the status of mosques and seminaries as a centre for people’s character building.

The minister said the clerics will have to earn the respect as any propagation of hatred from the pulpit would only compromise their dignity.

Qadri said the objective behind the establishment of the Rehmatul-lil-Aalameen Authority was to brainstorm the children and nurture their thought process besides inculcating in them the fear of God.

Special Assistant to PM on Interfaith Harmony Tahir Ashrafi while referring to the establishment of body and celebration of Ashra Rehmatul-lil-Aalameen, said Prime Minister Imran Khan was playing the role of a caller to prayer to develop Pakistan on the pattern of state of Medina.

He said it was need of the hour for the mosques to strive for character-building and extend support to the prime minister in his mission.

He said measures like Rehmatul-lil-Aalameen Authority should have been taken 70 years ago to teach the youth ethics and protect them against social evils.

Chairman of Islamic Ideology Council Dr Qibla Ayaz said the mosques and seminaries played their role to protect and promote Islam even during the times of the Mongols and communist revolution.

He said the credit for the restoration of peace in the country went to Paigham-e-Pakistan, a document signed by religious scholars from all schools of thought paving way for national unity against terrorism.

They were unanimous to appreciate the formation of the Rehmatul-lil-Aalameen Authority and called for extending support to the government for the accomplishment of its dream to develop Pakistan on the pattern of state of Medina.