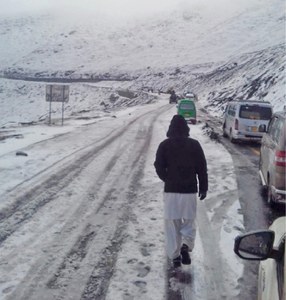 Hundreds of tourists and multiple vehicles were stranded in icy-cold weather after a snowfall at the Babusar Top in Gilgit Baltistan.

According to the police, rescue teams have reached the site and an operation to relocate tourists to a safer location is underway. It will, however, take time to rescue cars stuck on the roads.

Last week, Pakistan witnessed its first snowfall in the northern areas signaling the arrival of winters. Snow was reported in Battagram and Mansehra towns, parts of Azad Jammu and Kashmir, and Punjab’s Nathiagali.

In Naran, more than two inches of snow was recorded after which the MNJ Road, linking Khyber Pakhtunkhwa with Gilgit-Baltistan, was blocked at Babusar Top and adjoining localities. The road was cleared after a few days.

The Met Office has forecast dry weather across the country in the next 24 hours.